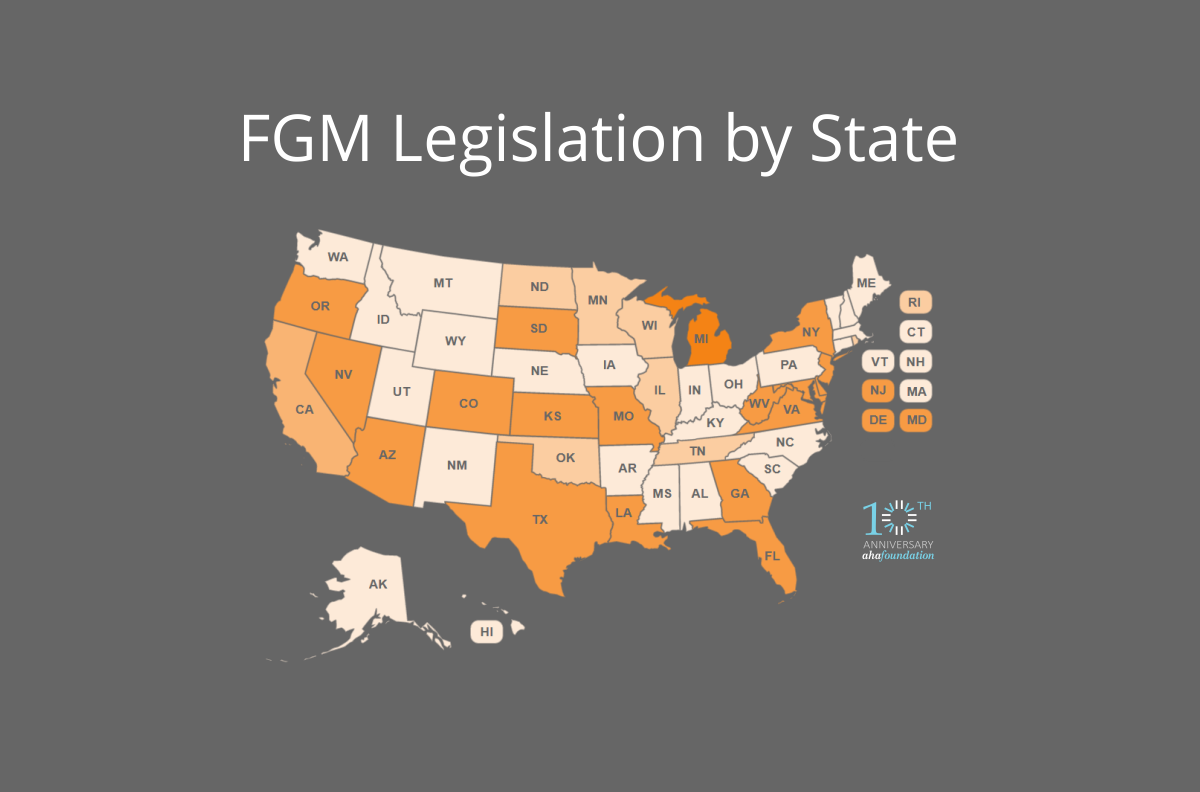 With the passage of the federal law ban, the Female Genital Mutilation Act in 1996, performing FGM on anyone under age 18 became a felony in the United States.[8] However in 2018, the act was stuck down as unconstitutional by US federal district judge Bernard A. Friedman in Michigan, who argued that the federal government did not have authority to enact legislation outside the “Interstate commerce” clause.[9] As part of the ruling, Friedman also ordered that charges be dropped against 8 people who had mutilated the genitals of 9 girls.[10][11] The Department of Justice decided not to appeal the ruling;[12] however, the US House of Representatives has appealed it.[13] As of August 2019, 35 U.S. states have made specific laws that prohibit FGM, while the remaining 15 states had no specific laws against FGM.[14] The US has also participated in several UN resolutions that advocate for the eradication of FGM, including the UN’s 1948 Universal Declaration of Human Rights, 1989 Convention on the Rights of the Child, and the Convention on the Elimination of All Forms of Discrimination Against Women (CEDAW).[15][3][16] –SOURCE: WIKIPEDIA

How many Americans realize that Female Genital Mutilation is NOT practiced only by Muslims in America?

Below is the story of a Christian woman who was subjected to FGM, at a very young age, and the details of her suffering caused by the procedure.

From The AHA Foundation:

I am a white, Christian woman who was born and raised in the United States. When I was five years old, my genitals were cut. In memory of my sister, I share my story with you today—International Day of the Girl Child—to break the silence about this child abuse in our country.

A Trip That Changed Our Lives

My parents told me and my sister that we were going on a “special trip.” We took a plane ride to an unknown destination and were met by strangers at the gate. There, my sister and I were separated until the end of the trip.  Little did I know that this trip would not only take away my childhood, but change my life forever.

I couldn’t understand these strangers because I was hearing impaired and was non-verbal at that point, so I couldn’t communicate well without my sister’s help. I was terrified. Eventually we reached a house, and I clung tight to my doll, my only source of comfort or anything familiar.

The next morning, a woman woke me up and grabbed my hand. She led me down a dark staircase to a room filled with more strangers around a table. They set me down on the table, and each person took one arm and one leg. I was unsure what was happening, and tried to fight back. I cried, screamed, and yelled, but nothing helped. Eventually, someone covered my eyes and mouth. This made me lose all contact with the world—because I was hearing impaired, my eyes were really my only communication with the world.

“I can still remember the intense pain that followed the initial cut.”

The next thing I remember was feeling the coldness of whatever they used to cut me on my bare skin. I can still remember the intense pain that followed the initial cut. To this day, I have never experienced anything to compare to that feeling. After that, I blacked out. I went somewhere safer. When I woke up, I immediately became aware that I couldn’t move. When I looked around, my legs were bound together with rope.

My favorite doll that I had brought on the trip was sitting in a pool of my blood. After being cut, I remember being very sick, and the strangers kept putting a cold cloth on my head to cool me down. This type of trauma on someone’s body is almost too much to handle, nevertheless a five-year-old. The whole time during my “recovery” I prayed for God to take away all the pain, and reunite me with my family. I was worried I would never see them again.

Our Lives After Genital Cutting

We weren’t the same people after that. Teachers labeled me a “troublemaker” due to the frequent bathroom trips I was taking because of complications from female genital mutilation (FGM). To not cause trouble, I began to try to hold it in rather than excuse myself from class, leaving me incredibly uncomfortable and totally distracted from what was being taught in the lesson

Because of this procedure, all of my children were delivered via c-section. It was not until my fifth child that a doctor even inquired as to what had happened to me. Only after this inquiry did I realize that this procedure was not something all women were forced to undergo. If there was a greater degree of education among teachers, doctors, counselors, and others who are likely to encounter survivors, I probably could have started my path to healing much sooner in life.

“It was not until my fifth child that a doctor even inquired as to what had happened to me. Only after this inquiry did I realize that this procedure was not something all women were forced to undergo.”

“As somebody with relatives who still support the underlying beliefs of this practice, the fear that my own children could be carried away and subjected to this abuse is devastating.”

Silence will perpetuate this practice. It was healing for me to talk to legislators, to tell them my story, and to be heard. I feel like I am doing something positive in response to something so negative that happened. I am optimistic that we will get a law passed in Kentucky.  Criminalizing FGM will serve as a deterrent to those who want to cut their girls; it will also send a message to survivors and at-risk girls that they have a choice, that they do not need to be subjected to this practice, and that can seek help if they are already dealing with the resulting traumas. FGM is not yet banned in 15 states and the District of Columbia.

Read the entire story at theahafoundation.org

Early this month a Kentucky woman reported that she had been forced to undergo female genital mutilation (FGM) along with her sister as a child by her white, Christian parents. Now in her 40s, Jennifer (a pseudonym used by Reuters for her interview) is calling for Kentucky to outlaw the practice. She recounts her parents telling her to never speak of it again. Her story follows Renee Bergstrom’s, “who revealed she had been cut at a church clinic when she was three because her mother thought she was touching herself.” As the second white American woman to recently come forward with her story, Jennifer is presenting a new face to the issue of FGM nationally and globally.  She recounts the teachings of the church leaders: “We were taught men were the leaders and God made women to be submissive,” she told the Thomson Reuters Foundation. “[…] For a woman to be sexual was seen as a sin, for her to have pleasure was a sin.”

While FGM has been illegal federally since 1996, there are still 21 states where FGM is still legal. These states range from more conservative states such as Kentucky, the Carolinas, and Alabama, to supposedly more liberal ones like Washington, Massachusetts, and Vermont. Ohio only just made the practice illegal this past January. There are an estimated 513,000 girls at risk or who have experienced FGM in the U.S. according to the AHA Foundation.

Implemented as a way to “cleanse women of sexual desires,” FGM has been medically proven to be dangerous and harmful, rather than helpful as many religious extremists believe. FGM contributes to life long health problems including difficulties in engaging in sexual activity, giving birth, the risk of infection (often life-threatening), chronic pain, and more.

While the AHA foundation largely focuses on the affects of Islamic extremism in regards to FGM, stories like Jennifer’s are coming to the forefront. The focus of FGM in the U.S. has been diasporic, Muslim communities who have immigrated from African countries where FGM is commonplace.

Though Female Genital Mutilation is considered primarily a barbaric practice of Muslims around the world, few probably realize that Islam is not the only religion to practice it.

How can you help?

Getting involved with The Aha Foundation would be a start.

If your state is one that has not yet passed anti-FGM legislation, then contact your reps to let them know how you feel.