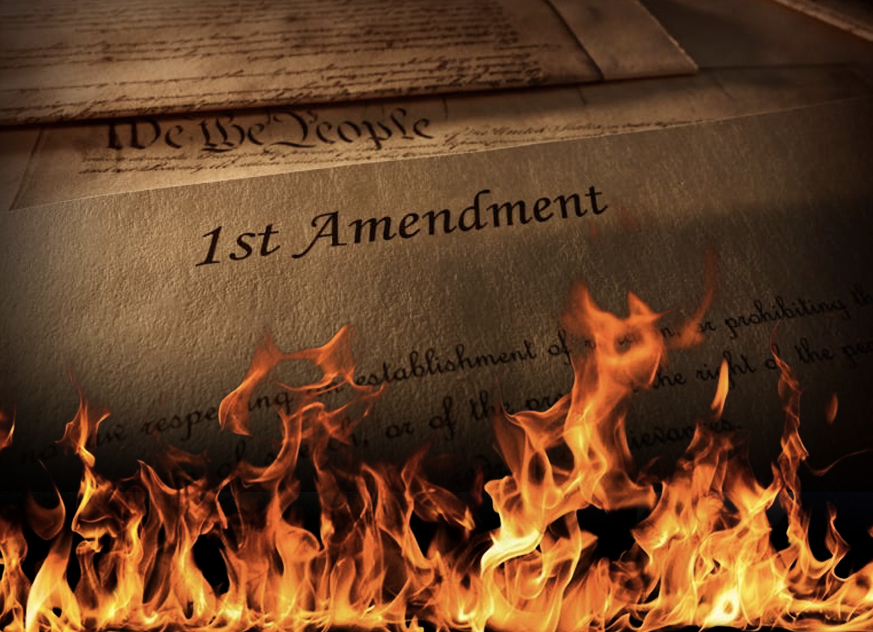 Let me begin by saying I have no idea what happened at Sandy Hook Elementary School on December 14, 2012.

However, since 9/11, I have questioned the veracity of many news reports and claims issued by officialdom about terrorism and mass shootings. The government and its media have been caught hundreds of times lying about or twisting news stories, so I believe skepticism is entirely warranted.

That said, I am now convinced the First Amendment is a dead letter. I have felt that way for some time. Recent events put a capstone on my previous arguments that much of the Bill of Rights is dead. This was recently underscored by the persecution of activist and author Jim Fetzer for writing a book that claims the massacre at Sandy Hook never happened.

A Wisconsin jury has ruled that James Fetzer, a retired professor from the University of Minnesota Duluth, must pay [Leonard] Pozner $450,000 for accusing him of forging his son Noah’s death certificate. Fetzer is the coauthor of Nobody Died at Sandy Hook, which alleges that Pozner faked his son’s birth certificate and that the Obama administration staged the shooting in an effort to pass legislation on gun control.

The ruling and “award” granted to the plaintiff will undoubtedly drive Fetzer to financial ruin if it is not overturned on appeal—and I predict it will stand. This court case is a pivotal moment for those who work to eradicate free speech, a right granted to those who make controversial statements or write books some people find objectionable.

The right to speak guaranteed by the First Amendment to the U.S. Constitution includes the right to voice opinions, criticize others, and comment on matters of public interest. It also protects the use of hyperbole and extreme statements when it is clear these are rhetorical ploys. Accordingly, you can safely state your opinion that others are inept, stupid, jerks, failures, etc. even though these statements might hurt the subject’s feelings or diminish their reputations. Such terms represent what is called “pure opinions” because they can’t be proven true or false. As a result, they cannot form the basis for a defamation claim.

It is Fetzer’s opinion Pozner lied about the death of his son and falsified his death certificate. The incident has a number of unanswered questions, including Facebook posts about the shooting that appeared the day before the event. The corporate media narrative on the shooting was changed several times. Military experts claimed it would have been impossible for a skinny 19-year old Adam Lanza to have shot so many people in such a short period of time.

If the government really wanted to put the entire case to rest and dispel what it calls malicious conspiracy theories, it would explain why, as Dr. Wayne Carver, the medical examiner overseeing the case, said during a news conference parents were not allowed to identify their murdered children. They were shown photographs instead. This is highly unusual and suspicious.

I’m not saying Lanza isn’t responsible. I’m saying there are numerous unanswered questions swept neatly into the memory hole by the government and its media. In short, the government is responsible for engendering conspiracy theories by not resolving key issues in this case and many others.

Getting to the bottom of Sandy Hook, however, is not the point here. The point is: as a citizen born with inalienable natural rights including speech, you will not be permitted to propose theories on certain topics the state has demarcated as off-limits and punishable if a “tinfoil hate conspiracy theorist” deviates from official narratives, many which are lies designed to emotionally manipulate people and gain consensus under false pretense to further degrade your right to speak and write on crucial issues.

The Fetzer trial is a big win for the ruling elite. For years now, it has worked tirelessly to characterize investigative journalism outside limits imposed by the government as criminal—and now, according to the FBI, as terrorism.

Jim Fetzer and Alex Jones are the first to be subjected to Soviet-like show trials for the crime of disagreeing with the state. More will follow in due course.

This Week’s Anti-Israel Attacks Wouldn’t Have Happened Under Trump
May 12th, 2021 The Lid

Hi-Jacking Government: FDA Authorizes Emergency Use For Pfizer’s mRNA Injections On 12-15-Year-Olds – Up To State Governors To Save Children
May 12th, 2021 Sons of Liberty Media

Southern Cities Running Out of Gas as Pipeline Remains Crippled
May 12th, 2021 Flag And Cross