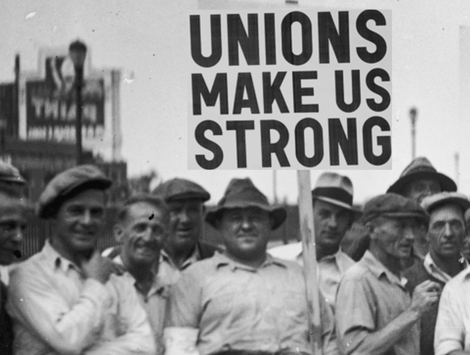 As the decline of the Rust Belt became increasingly obvious during the 1980s, protectionists attempted to blame the malaise on too little government protection from foreign competition. Campaigning for the presidency in 1984, Walter Mondale attacked Ronald Reagan for lifting quotas on steel imports, declaring ” Reagan’s policies are turning our industrial Midwest into a rust bowl.”

The Rust Belt never recovered its old-time manufacturing base, and it has long been fashionable among protectionists to claim that the modern Rust Belt has become a land of “communities broken technological advances, globalization, and unfettered free trade.”

That part about technology is about right. The rest, not so much. For a more complete picture of what has really led to the exodus of jobs from the Rust Belt, we need look no further than the current United Auto Workers strike. As of Thursday this week, “a council of union-hall leaders meeting in Detroit Thursday voted to extend the now 32-day walkout” which is estimated to have already cost GM $2 billion.

It doesn’t take a PhD in entrepreneurship to figure out why some manufacturers might be motivated to move far, far away from jurisdictions that encourage this sort of thing. Not surprisingly many manufacturing have indeed moved elsewhere — including within the United States.

Nor did the trend just start in the 1980s. As shown by economist Lee Ohanian

In other words, the decline began well before the age of “free trade” agreements and the supposed worldwide takeover by free-market liberals.1 And thanks to free trade and free movement of labor within the United states, the trend accelerated into the 1990s. During the ten years from 1996 to 2006, “Michigan lost 83,000 auto manufacturing jobs … but more than 91,000 new auto manufacturing jobs sprung up in Alabama, Tennessee, Kentucky, Georgia, North Carolina, South Carolina, Virginia and Texas.”

And why did rust belt experience such a decline? It was the result of government policy designed to protect both laborers and producers in the region from competition. In “The Decline of the U.S. Rust Belt: A Macroeconomic Analysis” the authors conclude:

The lack of competition in labor markets was closely linked to the behavior of powerful labor unions that dominated the majority of the Rust Belt’s manufacturing industries. In output markets,many of these same industries were run by a small set of oligopolists who, according to numerous sources, actively stifled competition for decades after the end of WWII. … [S]tate policies favoring labor unions greatly depressed manufacturing productivity over the postwar period.”

As a result, these industries became costly and un-competitive both domestically and internationally. Those who suffered were ordinary producers, entrepreneurs, and consumers outside the rust-belt’s cozy oligopolies. The the region’s influence in Washington, DC meant much of the country was forced to pay for the Rust Belt’s lethargy in the form of both higher prices and lower quality.

Naturally, both entrepreneurs and consumers benefited when they were able to slip the Rust Belt straight jacket.

Manufacturers more and more opened up shop in states where unions were politically weaker.

This was apparent by the late 1990s when empirical research by Thomas Holmes, showed

[O]n average, there is a large abrupt increase in manufacturing activity when one crosses a state border from an anti-business state into a pro-business state.

By “pro-business” he means states that have fewer laws and regulations that shield workers and firms from competition.

Thanks to greater international trade post-1980, American manufacturers were able to purchase inputs for their own manufacturing at lower prices. The consumers benefited in turn.

Those on the losing end were were the old, ossified unions and industries left in the Rust Belt where state policies never caught up with reality. Indeed, many of these firms became so inept at serving their customers, some had to turn to government bailouts to stay in business.

In even a moderately free-market, of course, General Motors  — and the jobs at GM’s plants — shouldn’t exist at all. When it went bankrupt in 2009, the US taxpayer paid for a partial government takeover of GM, to the tune of a 50-billion dollar stake in the company. Since then, the Treasury has only managed to recover $38 billion, which means $12 billion will never be recovered at all. But the real cost of the bailout is not just in the cash handed over to GM. The true cost is borne by entrepreneurs and consumers who would have benefited had GM been liquidated and its capital taken over by more competent and productive managers, owners, and employees.

Instead, what the GM bailout gave us was a continuation of the old protectionist policies that make the Rust Belt so costly and unproductive in the first place.

In the minds of protectionists, of course, this is all fine. For them, the old manufacturing economy should be protected, no matter how much that protection means consumers and entrepreneurs are fleeced on a regular basis. This is to be done, we are told, in part to “preserve communities” or shield ordinary people from the alleged tyranny of global competition. But what if GM can’t build what people want at a price that makes sense for consumers and entrepreneurs? No problem! Just bail them out using the hard-earned cash of productive people from other industries.

But what is the end game here? Just imagine if steel and auto manufacturers had never had to face competition from other US regions or from foreign manufacturers. Should state and local governments just kept ramping up pro-union and anti-trade policies as Rust Belt manufacturers became less and less productive? The result would have been American manufacturers decades behind global trends, with factories still churning low-quality goods at ever-higher prices.

Globally, of course, this has already been tried. For decades, Latin America was in the thrall of Dependency Theory which suggested governments out to protect their industries so they could “develop” while shielded from foreign competition. In reality, the opposite happened. Protected industries became less and less able to compete or to deliver goods and prices that allowed the rest of the economy to develop. The result was stagnation. India tried a similar “self-sufficiency” experiment. It failed.

The same would have happened in the US had the US stuck with its mid-century protectionism. Fortunately, however, the Sunbelt embraced pro-business, pro-competitive policies that provided an easy escape for many firms from the Rust Belt. Meanwhile, growth in international trade allowed entrepreneurs and small business owners access to less-expensive foreign goods that could be converted into new types of goods, services, and firms.

The death grip of the protected, subsidized, costly, and unproductive Rust Belt had fortunately been broken.

This isn’t to say the Rust Belt couldn’t modernize if it wanted to. States like Michigan and Ohio could embrace a political economy more geared to serving consumers while allowing more free choice for entrepreneurs, small business owners, and other producers. Instead, these states choose to stick with old pro-union policies that enable walkouts and shutdowns of the sort we now see at work in the UAW strike.

Rust Belt manufacturers can continue to make a good show of things so long as the economy is in growth mode. But as 2009 showed, things are likely to look very different once recession sets in. When that happened, we’re likely to see even more union-staffed shops pack up and disappear. Protectionists will probably then say its all the fault of free trade, and that all the country needs is a nice new set of tariffs. But just as trade protection failed to save the Rust Belt decades ago, the same will be true in the future.