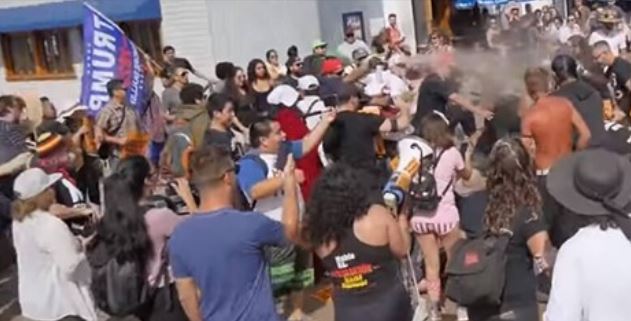 SOUTHERN CALIFORNIA – During a chaotic scene on the Santa Monica Pier between supporters and protesters of President Trump, a man sprayed protesters with bear repellent, according to police.

The man, wearing a red MAGA hat, obviously reached his boiling point with this anti-Trump garbage and chose to take matters into his own hands.

Big mistake- only Antifa and radical leftists are allowed to beat people up, destroy property and use bear spray which is more powerful than pepper spray and get away with it.

Carmine Sabia at The Federalist Papers has more:

The way he went about attempting to end it was illegal and he found himself getting arrested for his effort.

The unidentified man circled around a crowd of the protesters and then began to spray them with what police said was bear repellent.

Bear repellent has been used in the past by Antifa protesters and is a form of pepper spray similar to what police use, The Los Angeles Times reported.

“The substance, which Hicks said was bear repellent, sent the crowd scattering and people can be heard screaming on the video,” it said.

“As other Trump supporters held a protester on the ground, the man rushed back into the fracas and doused the protester at close range, the video shows.

“Police received 911 calls from the pier and the video shows officers responding soon after the man sprayed the crowd, The Times said.

“Several people pointed out the man, who remained nearby, and police took him into custody, according to the video.

“Hicks said he was not authorized to release the man’s name, but described him as a 33-year-old from the area with a ‘fairly extensive’ criminal record.

“The man remained in custody Sunday on suspicion of violating the terms of his parole from a previous weapons violation, Hicks said.

“After viewing video of the incident, police realized a second, older Trump supporter may also have sprayed the crowd. Police are still working to identify that man, Hicks said,” The Times said.

The man is obviously a criminal who has engaged in criminal activity before but it will not be long before every supporter of President Trump is painted with the same brush.