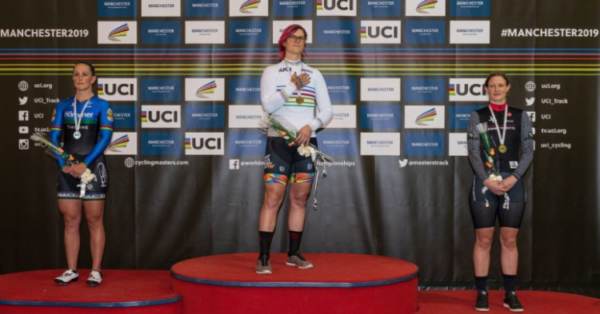 When is the Left going to wake up to their madness?

The butch haircut and beer belly didn’t give him away?

More from Christine Laila at The Gateway Pundit:

Transgender cyclist Rachel McKinnon, a biological male, dominated at the Masters Track Cycling World Championships in Manchester over the weekend.

McKinnon set a women’s world record on Saturday for the 35-39 sprint, won a 200m gold medal and then complained about how unfair it would be if he was excluded from competing against biological females.

The 37-year-old, competing in the female 35-39 sprint category, had set a new world best time in qualifying.

McKinnin defended his ‘right’ to compete against biological females and complained about how stressful it is for him to even show up at sporting events because of all the attention he gets.

“So, if we want to say, that I believe you’re a woman for all of society, except for this massive central part that is sport, then that’s not fair,” McKinnon told Sky News.

“I’ve thought about giving up about half a dozen times a year at least,” he said. “It’s so stressful to even show up for me given the sort of attention I get.”

McKinnon added, “Every athlete has physical advantages and we’re all trying to exploit them. So to single out a trans woman, when I lose most of my races, is a little unfair.”

How about we just start having transgender championships and leave the beer belly trannies to compete with their own kind?

If it has or once had a penis it should be disqualified.

What the hell is happening to our culture?

Again, if you disagree you’re bigot.

What the hell is wrong with you people?

We aren’t talking about men squatting to pee here folks.

We are talking about biological males ruining women’s sports.

Again, what in the hell is wrong with people?

Do you liberals really tell your daughters that she lost fair and square to a MAN?