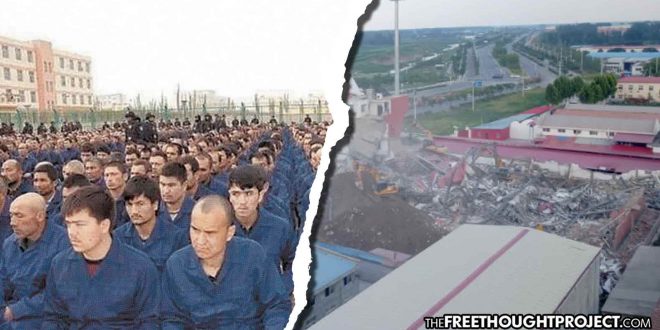 Millions of Americans are about to be celebrating the Christmas season not being fully aware just how anti-religion and anti-spiritual the People’s Republic of China actually is. Not only do they persecute Christians and demolish their houses of worship, but they force innocent people into slave labor making Christmas lights for 10 hours a day in what can be referred to as black site concentration camps. Seriously.

In a disturbing article from Haaretz this month, Sayragul Sauytbay, a Muslim woman of Khazak descent, detailed her story of escaping one of these concentration camps in which gang rapes, torture, murder, and medical experiments were daily activities.

Sauytbay describes being forced to witness a gang rape while at the camp. A young woman, she says, was forced to disrobe after being forced to “confess” her sins in front of around 200 prisoners. The young woman was then raped by several police officers, Sauytbay said.

“While they were raping her they checked to see how we were reacting. People who turned their head or closed their eyes, and those who looked angry or shocked, were taken away and we never saw them again.”

There were also medical experiments performed on the prisoners, according to Haaretz; they were forced to take pills and were given shots, but were not told the truth about what the medical procedures did. Some who were subjected to them report impotence and cognitive decline, according to reporting in Haaretz and The Believer.

While this is taking place in secret, the government has no problem openly persecuting religions.

Later, in June, the government followed through on its promise to demolish churches who would not comply. Acceptance of the church as an official denomination of Christianity goes all the way back to the turn of the 20th Century when the church was established in China. It is defined as a member of the Pentecostal movement of churches.

The Henan Provincial government ordered the True Jesus Church to be demolished in June. On June 22nd, some 200 members were forcibly removed and injured so badly they were hospitalized. According to Xin Lu of Bitter Winter magazine, the church was located in the town of Caidu, in Shangcai county, and under the jurisdiction of Zhumadian city in the central province of Henan. According to Lu, the city wanted to repurpose the 1.5 million dollar Christian church over the objections of the long-standing, fully accepted by the government, Christian congregation.

The Religious Affairs Bureau, who was in charge of the raid, claimed that the church was engaged in “illegal fundraising” and was, thus, an “illegal building.” He ordered the person in charge to vacate the church, which would be converted into a nursing home, but the congregation refused to obey.

Then, at 3am on July 22nd, a group of 1000 government officials raided the church. Police officers were ordered to not allow people to make cell phone calls or to take pictures. They were also ordered to forcibly remove anyone inside the building attempting to prevent the church from being demolished.

As soon as all orders were given, the group of 1,000 people went to the church. All intersections leading to the church were cordoned off, officers stormed inside, and started dragging out congregants who were guarding the church. Two elderly believers were injured in the process; one was taken to the hospital because her blood pressure spiked from the stress.

What happened next shocked and dismayed many. Excavators were sent in and within three days, the church was razed, and landscaping was added which completely erased the church’s existence.

Right after that, eight excavators began demolishing the church, worth about 10 million RMB (about $ 1,400,000). Three days later, the church was razed to the ground completely. All the rubble left behind after the demolition was quickly taken away, and a new lawn with saplings planted in place of the church, bearing no trace of its existence.

Members of the church were accused of kidnapping the Religious Affairs Bureau director and several fled for their lives, wishing not to be detained.

Many times, Christians and other political dissidents find themselves being detained and sent to concentration camps without any due process. The Independent magazine actually interviewed a Westerner who was sent to one such prison camp and described how he was forced to sleep on concrete floors and work 10 hours per day making Christmas lights.

South Carolina native Stuart Foster spent 9 months in a Chinese slave labor prison camp accused of fraud, something he said was a simple misunderstanding. He had no trial and was forced to live in subhuman conditions forced to work all day long.

Like me, many prisoners had been detained without trial, and they would be released after a few days or months, but it didn’t matter if you were guilty or not, you were going to work in there…You have nothing, no chairs or beds, just a concrete floor to sleep on,” he says. “Each day, they clap at 7am to wake you up, and then you sit in a line and chant communist slogans – ‘Make the motherland strong’, ‘Hail to the party’ – then you stand up, and do marching, and then the work comes. They come and drop fairy light bulbs, receptacles, and wires at your feet, and that was your job for the day for the next 10 hours.

Foster, who is a Sociology professor and who, even now, does not want the Chinese government to know where he lives, says if Americans knew the Christmas lights they so cherish were probably used to beat a prisoner, they would likely get very angry.

Earlier this year, Facebook CEO Mark Zuckerberg pushed very hard to get his company into China to no avail. Facebook was pushed out earlier this year yet Zuckerberg still compares his platform to TikTok, a Chinese run social media platform which bans all political speech, something Facebook conveniently forgets they do/did as well.

Last October, Facebook purged hundreds upon hundreds of sites, including The Free Thought Project and Police the Police citing “inauthentic behavior” as its reason without explanation. To date, The Free Thought Project has been banned three times, and Police the Police, two times. Each time Facebook bans us, we reopen our page with version 2.0, 3.0, and so on and we will continue to do so until our reach is restored and our original 6 million followers brought back to us.

The United States would do well to pay attention to what’s going on in China before their social media credit scores and state-sponsored censorship regimes are exported to what’s left of the Land of the Free.