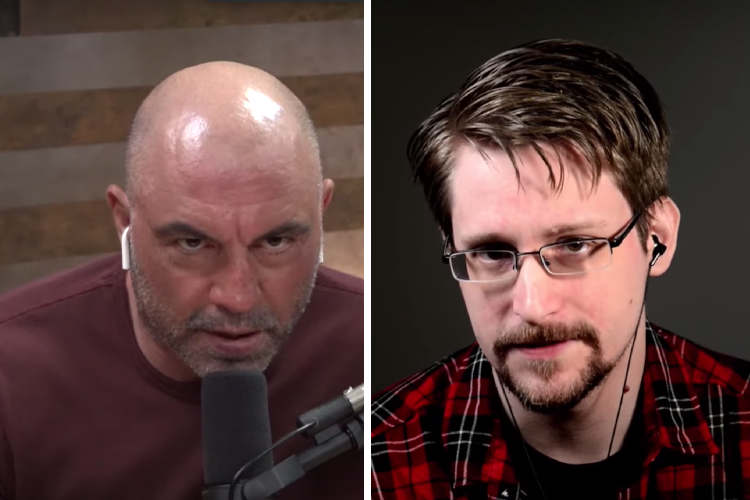 Since 2013 the real government whistleblower, Edward Snowden, has been in political asylum in Russia, where he continues to write books and tell his story of how as an employee of the NSA he discovered that the government was breaking the law in constructing a massive surveillance state. Today, the surveillance is such a ubiquitous par of our lives, that people have come to see it as a normal part of everyday life, and hardly any politician bothers to work against it. It’s here to stay, sadly.

Recently, Snowden published a book entitled Permanent Record, which was immediately attacked by the US government, prompting them to sue Snowden for all of the profits related to the book. The government does not want you to hear his message. Ironically, though, Permanent Record became an instant bestseller, and Snowden’s popularity has only increased in recent years.

In a newly released podcast by Joe Rogan, Snowden calls in from Russia, talking about his understanding of how corruption from within has led the permanent establishment of the massive and highly profitable surveillance state which has filled the coffers of defense contractors and corrupt politicians. Snowden discusses the fact that all three branches of the U.S government are corrupt and that for admirable government employees who witness government agencies breaking the law have no available channels to blow the whistle and get the truth out to the American people.

Interestingly, in the podcast Snowden also talks about his experience on 9/11 when he was working for a small business out of a house on Fort Meade near the DC metro area. He describes how the base, which is home to a vast portion of the U.S. Military’s intelligence apparatus, was immediately dispatched and the base cleared as soon as the events of the day began to unfold.

Snowden points out how strange this was, considering that all of the personnel on the base would have been more than willing to take the risk of being attacked in order to fulfill the duty they has all signed up for, that of protecting the American people. Snowden’s point here is that the intelligence agencies were essentially taken off-line at the most critical moment in the entire history of their existence.

So, why did the directors of these agencies send all of these resources home on 9/11?

“It says so much about the bureaucratic character of how the government works. The people who rise to the top of these governments. It’s about risk management for them. It’s about never being criticized for something…

Everybody wants to believe in conspiracy theories because it helps life make sense. It helps us believe that somebody is in control… that somebody is calling the shots, that these things all happen for a reason. There are real conspiracies… but when you look back at the 9/11 report and when you look back at the history of what actually happened, what we can prove. Not on what we can speculate on, but what are at least are the commonly agreed facts… it’s very clear to me, as someone who worked in the intelligence community… that these attacks could have been prevented.” ~Edward Snowden

He goes on to explain that the government’s excuse for not preventing the attacks was essentially due to the fact that the various intelligence agencies were unable to effectively share information, coordinate investigations, and work together. Snowden is implying that 9/11 was essentially allowed to happen so that the mass surveillance state, which is insanely profitable to certain people, could be created. And it has since been created.

Considering that the Patriot Act soon followed 9/11, and in the nearly two decades since, the massive warfare and surveillance state continues to balloon and spread its reach into American citizen’s lives and around the globe, Snowden’s assessment seems rather accurate.

The full interview is almost 3 hours long, and is posted in full here:

This article (Edward Snowden on the Joe Rogan Podcast – Says US Government Could Have Prevented 9/11) was originally created and published by Waking Times and is published here under a Creative Commons license with attribution to Vic Bishop and WakingTimes.com. It may be re-posted freely with proper attribution, author bio and internal links.