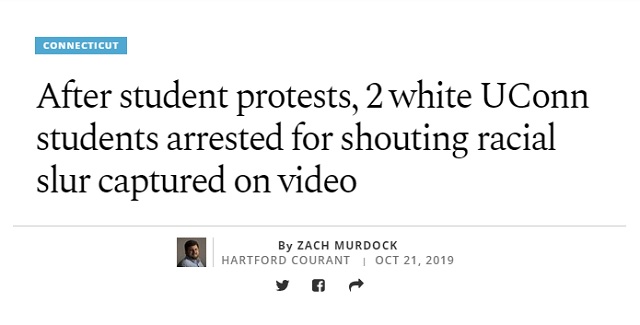 Editor’s Note: Does free speech encompass speech that might be considered hate speech?

I disapprove of what you say, but I will defend to the death your right to say it. –Commonly attributed to Voltaire, possibly originating with Evelyn Beatrice Hall in 1906

Two students at the University of Connecticut were arrested and criminally charged with “ridicule” for using the “N-word.”

Two white UConn students have been arrested by campus police for repeatedly shouting a racial slur outside students’ apartments earlier this month.

The incident was captured on a now-viral video that has led to pointed conversations about racial inclusion on campus and sparked a rally Monday afternoon during which hundreds of students and the campus NAACP demanding action from top school officials.

Jarred Karal, of Plainville, and Ryan Mucaj, of Granby, both 21 years old, were arrested by the UConn Police Department and charged with ridicule on account of creed, religion, color, denomination, nationality or race, university spokeswoman Stephanie Reitz said Monday night.

Officers investigating the incident watched the video of the men yelling late on Oct. 11 outside the Charter Oak Apartments and ultimately traced their whereabouts back through the night, determining they walked back through the complex playing “a game in which they yelled vulgar words,” according to a police report. Police determined a third student seen in the video did not participate and was not charged.

Investigations are underway into hate speech at UConn. Students are demanding more be done to promote tolerance after a video captured a racial slur being said several times. #NBCCT pic.twitter.com/skrVRhjx3Y

Both men were released on written promises to appear and are scheduled to appear Oct. 30 in Superior Court in Rockville.

“It is supportive of our core values to pursue accountability, through due process, for an egregious assault on our community that has caused considerable harm,” UConn President Thomas Katsouleas said in a statement late Monday night. “I’m grateful for the university’s collective effort in responding to this incident, especially the hard work of the UConn Police Department, which has been investigating the case since it was reported.”

The announcement of the arrests came just hours after students gathered to protest and march outside the Student Union on Monday afternoon, chanting “it’s more than just a word” and “our voices will be heard,” before impassioned speeches by professors and students.

This is the statute:

This is a blatant violation of the First Amendment but they simply don’t care.

“Your rights end where our feelings begin” is now official policy in Connecticut and states like New York where they just made it a “crime” punishable with fines up to $250,000 to call someone an “illegal alien … with intent to demean, humiliate or harass a person.”