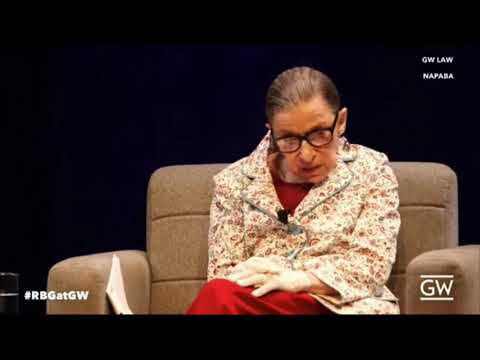 The problem is not that anyone is foolish enough to advance liberalism or pay RBG $1 Million for doing so.

The problem is that The Berggruen Institute is strongly connected to China, so much so that it has its own research center at Peking University.

Supreme Court Justice Ruth Bader Ginsburg scored a $1 million dollar prize thanks to her history of liberal court decisions, though the organization making the payout has a worrying background.

The Berggruen Institute announced Wednesday that its 2019 Berggruen Prize for Philosophy & Culture would go the Ginsburg, essentially because she’s used her position to  advance liberal causes.

“Throughout her career, Ginsburg has used the law to advance ethical and philosophical principles of equality and human rights as basic tenets of the USA,” institute founder Nicolas Berggruen said in a news release.

“Her contributions have shaped our way of life and way of thinking and have demonstrated to the world the importance of the rule of law in disabling discrimination.”

Considering the release calls Ginsburg a “trailblazer for human rights and gender equality,” it’s clear that Justices Brett Kavanaugh and Neil Gorsuch are not likely candidates for next year’s prize.

The prize money will be directed to organizations and charities of Ginsburg’s choice.

The most worrying aspect of this entire competition is the Berggruen Institute’s background.

The institute is a pro-China think tank that unashamedly supports China’s invasive social credit system, which allows that country’s communist regime to exert even more control over its citizens’ lives.

Another project by the organization, The WorldPost, seeks to push its dangerous liberal narrative on the internet via willing outlets like The Washington Post.

The WorldPost is a dizzying mix of radical environmentalism, anti-right fearmongering and cheerleading for China’s oppressive government.

Just last week, the project published an article warning that climate change could lead to a surge in right-wing environmentalists. In the piece, the institute’s vice president of programs, Nils Gilman, predicted a world in which climate-conscious conservatives shoot refugees at the border.

In another shocking post, the organization gave its take on the Hong Kong crisis.

“Only Beijing can help reduce inequality in Hong Kong,” writer Chandran Nair asserted, “but a large portion of the population view the Chinese government as a threat to their freedom.”

Sure, Chinese paramilitary forces are massing in the area surrounding Hong Kong, apparently ready to take the port city at the point of a bayonet, but let’s focus on inequality that the communists can’t even seem to fix in their own country.

Bergguen has its own YouTube channel, that lacks in popularity.

But a lot can be gleaned by watching videos that have been seen by very few.

The Berggruen Institute paid $25.5 million for its own building at Beijing University.

It is sometimes referred to as The China Center.

Launched by the President of Peking University and the Chairman of the Berggruen Institute on December 19th, 2018, the Center engages China’s most outstanding thinkers to examine, share, and develop ideas to address global challenges. The Berggruen Institute has committed $25.5 million to establish the Center, which includes a fellowship program, and houses program activities such as lectures and symposia alongside a host of other public events. The Center is located at Peking University. Professor Lin Jianhua, former President of Peking University, together with Professor Roger T. Ames…

I’ll leave you with a Berggruen Institute video from it’s Chinese campus location.

At the time of this writing, less than 200 people have seen the video.

The Berggruen Institute is not exactly a booming channel on YouTube.

Yet, they keep posting stuff that no one seems to want to watch.

Why are these guys slipping a $1 Million prize to the notorious RBG?

I find no evidence of Bergguen having their own building at any American University.

I find that odd since American Universities are now overrun by socialist & communist principles.

I’m sure it’s in their plans.