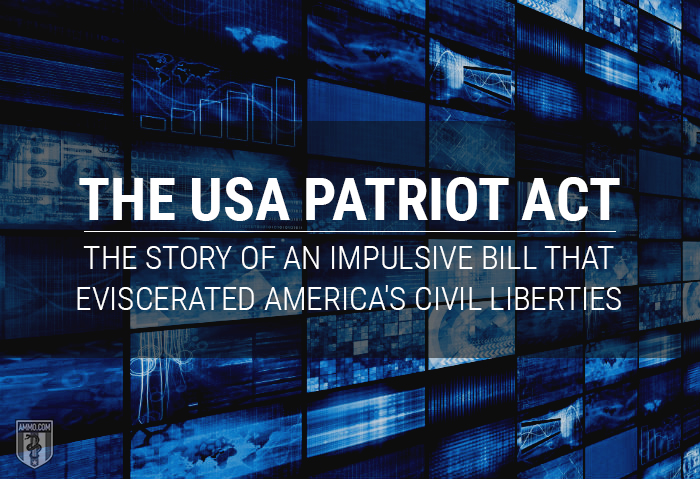 The USA PATRIOT Act provides a textbook example of how the United States federal government expands its power. An emergency happens, legitimate or otherwise. The media, playing its dutiful role as goad for greater government oversight, demands “something must be done.” Government power is massively expanded, with little regard for whether or not what is being done is efficacious, to say nothing of the overall impact on our nation’s civil liberties.

No goals are posted, because if targets are hit, this would necessitate the ending or scaling back of the program. Instead, the program becomes normalized. There are no questions asked about whether the program is accomplishing what it set out to do. It is now simply a part of American life and there is no going back.

The American public largely accepts the USA PATRIOT Act as a part of civic life as immutable, perhaps even more so than the Bill of Rights. However, this act – passed in the dead of night, with little to no oversight, in a panic after the biggest attack on American soil since Pearl Harbor – is not only novel, it is also fundamentally opposed to virtually every principle on which the United States of America was founded. It might not be going anywhere anytime soon, but patriots, liberty lovers and defenders of Constitutional government should nonetheless familiarize themselves with the onerous provisions of this law, which is nothing short of a full-throttle attack on the American republic.

What’s Even in the USA PATRIOT Act?

What is in the USA PATRIOT Act? In the Michael Moore film Fahrenheit 9/11, then Rep. John Conyers cracked wise about how no one had actually read the Act and how this was in fact par for the course with America’s laws. Thus, before delving into the deeper issues surrounding the PATRIOT Act, it is worth discussing what the Act actually says. Here’s a brief look at the 10 Titles in the PATRIOT Act:

Most of the provisions of the USA PATRIOT Act were set to sunset four years after the bill was passed into law. However, the law was extended first by President George W. Bush and then by President Barack H. Obama. The latter is particularly scandalous given that, at least in part, a rejection of the surveillance culture that permeated the Bush Administration was responsible for the election of Obama in 2008.

Next, it’s important to remember the environment in which the USA PATRIOT Act was passed: Post-9/11. It is not the slightest bit of exaggeration to label the environment in which the PATRIOT Act was passed as “hysterical,” nor is “compliant” a misnomer for the Congress of the time. Opposition to the Act was slim and intensive review of one of the most sweeping Acts of Congress in American history was nonexistent.

All told, Congress took a whopping six weeks drafting, revising, reviewing and passing the PATRIOT Act. That’s less time than Congress typically spends on totally uncontroversial and routine bills that don’t gut the Fourth Amendment. The final vote found only 66 opponents in the House and one (Wisconsin Democrat Russ Feingold) in the Senate. The entire passage of the PATRIOT Act, from start to finish, took place behind closed doors. There were no committee reports or hearings for opponents to testify, nor did anyone bother to read the bill.

“Uniting and Strengthening America by Providing Appropriate Tools Required to Intercept and Obstruct Terrorism” is the bloated and overwrought full name of the bill, crafted by a 23-year-old Congressional staffer named Chris Cylke. This ridiculous name puts the focus not on the surveillance aspects or the erosion of basic civil liberties enshrined in Western society since the Magna Carta, but on patriotism. At the time of its creation, the messaging was very clear: Real patriots support massive intrusions on civil rights. As President George W. Bush said at the time, “Either you are with us, or you are with the terrorists.” This sentiment very much seemed to apply to American citizens.

While the argument that if you have nothing to hide you shouldn’t fear investigation is anathema in a Constitutional republic with regard to citizens, it should be standard operating procedure when it comes to our organs of government. If we cannot expect transparency from the United States Congress – elected officials charged with representing the will of the people and protecting the Constitution – then we certainly can’t expect it anywhere else.

The Unfortunate Growth of the USA PATRIOT Act

It’s no surprise to those in the liberty movement that given an inch, the government (in particular the military-intelligence community) took a mile. Even the nebulous definition of “terrorism,” largely centered around a long litany of acts rather than the motivation behind them, has expanded to include receiving military training from a proscribed organization (without actually committing any terrorist acts or even acts of violence of any stripe) as well as “narcoterrorism” – the latter particularly convenient, as the United States government continues its losing “War on Drugs.”

Indeed, in many ways, the War on (Some) Drugs was the template for the War on Terror. Both wars have no defined enemy, no defined terms of victory. Instead, they are waged against a nebulous concept, while enjoying bipartisan support for their ever-expanding budgets. What’s more, it didn’t take long for the Feds to start using the USA PATRIOT Act for things it was never intended for, including prosecuting the War on Drugs.

Perhaps the silliest application of the USA PATRIOT Act is the prosecution of Adam McGaughey. McGaughey maintained a fansite for the television series Stargate SG-1. The Feds charged him with copyright infringement and computer fraud. In the course of their investigation, the FBI leveraged the PATRIOT Act to get financial records from his website’s ISP. This was made possible by the USA PATRIOT Act amending the Computer Fraud and Abuse Act, allowing for search and seizure of ISP records.

In one of the biggest power grabs (excluding virtually everything we know from Edward Snowden – more on that below), the FBI sent tens of thousands of “national security letters” and procured over one million financial records from targeted businesses in Las Vegas. These businesses were primarily casinos, car rental bureaus and storage spaces. The data obtained included financial records, credit histories, employment records and even people’s personal health records.

The FBI maintains and databases this – and, indeed, all information collected through the USA PATRIOT Act – indefinitely. In the good old days before the PATRIOT Act, the Feds were compelled to destroy any evidence they collected on someone later found not guilty of a crime. Note that the aforementioned data collection brought to public attention by Edward Snowden (which, again – we’re getting to that) falls under this provision. Not only is the government collecting obscene amounts of private and personal information about you, they’re also storing it indefinitely with no plans to stop.

What’s more, the FBI has approached public libraries to turn over the records for specific terminals, collecting information not about specific users who might be under investigation, but about anyone who has ever used the computer at the public library. Libraries, to their credit, have been very much at the forefront of resistance against the PATRIOT Act, with some litigating compliance despite operating on small budgets and others posting “canary letters,” which effectively say “The FBI Hasn’t Been Here Yet.” The removal of such a letter would warn patrons that the FBI has been sniffing around in their records.

Indeed, the greatest criticism of the PATRIOT Act is the simplest and perhaps most obvious: Why does an Act ostensibly passed to fight terrorism so drastically expand the government’s power to investigate virtually everyone else? The PATRIOT Act is not merely unconstitutional, it is an unprecedented expansion of state power in the Anglosphere, a culture based on restricted government and the primacy of individual rights.

An excellent example of this is the Foreign Intelligence Surveillance Act (FISA) expansion. Most people are familiar with the term “FISA court,” but very few people actually know what it is – a special federal court created under the Carter Administration that grants approval of electronic surveillance of both citizens and resident aliens in the event that they are accused of acting in the service of a foreign power. The last part of this sentence is very important: The FISA courts are not simply for allowing surveillance of anyone that it might be expedient to collect information about. The scope of their powers is very, very limited.

The PATRIOT Act lowered the burden of evidence required to obtain a FISA warrant for electronic surveillance and expanded the overall scope of the FISA courts. Any savvy federal agent can now drape his charges in the garb of (what else?) “national security” and obtain electronic surveillance privileges hitherto only dreamed of by investigators. FISA courts have become pliant tools in the hands of the Feds, gladly approving their requests to monitor phone and internet surveillance, as well as access to medical, financial and educational records.

The Future of the USA PATRIOT Act

Do we still need the PATRIOT Act? Did we ever? All laws are certainly a product of their times. But this seems much more acutely true of the USA PATRIOT Act, which was passed in a rush and under duress without due consideration.

Particularly in light of the revelations from Edward Snowden – that the government is spying on everything they possibly can – it’s worth asking if there’s any walking back. He points out that the police state apparatus was originally for drug dealers, then for terrorists, but ultimately ended up being applied to anyone and everyone.

What’s more, Bob Bullard notes another frightful aspect of the USA PATRIOT Act: Terrorism-related cases are not subject to the Freedom of Information Act. This means that there is little or no oversight. There is no surer hallmark of a police state than an all-powerful domestic surveillance agency with no transparency or oversight. While the USA PATRIOT Act might not create an American Stasi as such, it certainly paves the way for one.