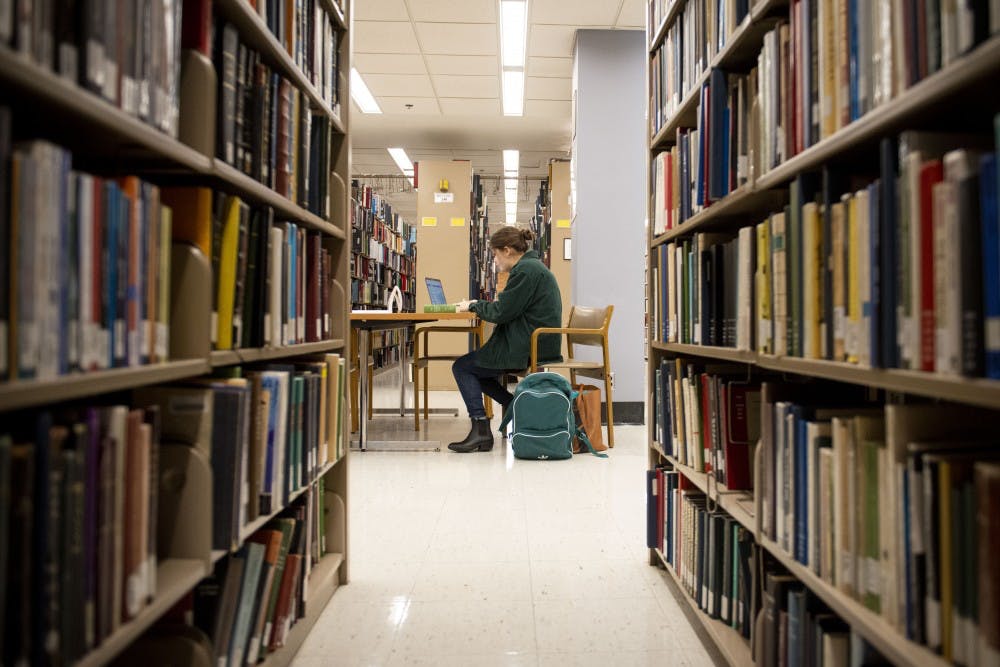 Lauren Meyers works in the O. Meredith Wilson Library on Friday, Oct. 18. Meyers criticizes the use of the Hans Wehr Dictionary of Modern Arabic, seen on the table, due to Wehr’s role in the Nazi party in the 1940’s.

Vanpee, the director of Arabic language instruction at the University, told her students she never thought she would have to talk about Nazis on the first day of class, Meyers said. She proceeded to inform her students about the background of a text that was on the course’s book list: the “Arabic-English Dictionary: The Hans Wehr Dictionary of Modern Written Arabic.” Vanpee told her class that this dictionary — the most widely used Arabic dictionary in the world — was published in 1952 by a member of the Nazi party.

Though the book had previously been required at all language levels of Arabic at the University, Vanpee told her students she would not be requiring it in her classroom. The Arabic department is currently working on a policy that will apply to all Arabic classes to address the dictionary’s history.

Her disclaimer to her class about the dictionary came after second-year student Rodrigo Tojo Garcia found information online about Wehr’s background after having already purchased the dictionary some months ago.

“…I was amazed that it hadn’t come up, that no one had talked about it,” Tojo Garcia said. “You would think with something like that, especially in the modern political climate … that someone would’ve mentioned at some point that Hans Wehr did this — but they didn’t. And that was a shocking thing to know,” he said.

After Tojo Garcia told Meyers about Wehr’s background, she went to Vanpee with her concerns about the history of the dictionary. Though Meyers said she was not expecting much to come from the conversation because she thought it was probably too late for Vanpee to modify any book lists, Meyers said she was happy to hear Vanpee talk about the book’s history on the first day of class and offer it as optional.

“I don’t want to require a dictionary that is a product of Nazi Germany, even if you could technically argue that the Hans Wehr dictionary that’s being used here is not exactly the same as the original one,” Vanpee said, noting that the dictionary had been edited by an American academic. “…The fact that ‘Hans Wehr’ is still on the cover is, of course, still really problematic.”

“What I find most problematic about the dictionary’s name is the fact that all of us who are familiar with the dictionary, refer to it as “Hans Wehr.” (i.e. automatically crediting him and only him, and not his contributors),” Vanpee said in an email.

Despite the Hans Wehr dictionary’s disturbing background, it is the most useful dictionary for independent Arabic learners for various grammatical reasons, Vanpee said. It is also widely used in Arabic instruction across universities.

In addition to starting a dialogue with her students about the topic, Vanpee is also consulting and evaluating with Arabic instructors and faculty about listing the print dictionary as a suggested work rather than a required one.

Tojo Garcia, who bought the Hans Wehr dictionary about a year ago, said he was exploring purchasing a different dictionary. “I have the [Hans Wehr] dictionary, and it poses something of a problem because it’s not exactly completely ethical for me to resell it knowing exactly what that is,” Tojo Garcia said. “But at the same time, my use of this dictionary is also problematic, so at this point I am looking into alternatives.”

Second-year student Nibraas Khan, who is in her first Arabic class this semester, is using a free PDF version of the dictionary. She said if the book was optional for her class, there is no way she would buy it. “I personally just don’t feel comfortable ever buying anything that incorporates any sort of Nazi ideologies, symptoms et cetera,” Khan said.

To Meyers, the issue is reminiscent of University conversations about renaming several campus buildings. “I really do believe in the power of names,” Meyers said. “If we’re operating with a dictionary every day that was named after someone who learned this language as a tool to use the Middle East and Arabic-speaking countries for their heinous motives, that’s really disrespectful and really harmful.”

Meyers is borrowing the Hans Wehr dictionary from the library because she said she does not feel comfortable giving her money to the dictionary in any way.

“I think making the book optional and having that conversation is very important for Arabic learners to understand,” Meyers said.