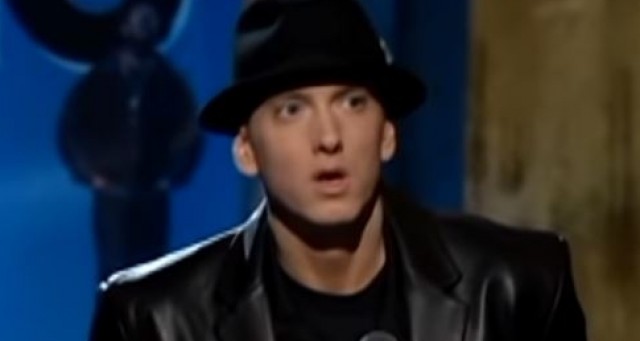 Washed up white rapper Eminem was questioned by the Secret Service after releasing an album containing “threatening lyrics” about President Trump and his family, according to documents obtained by BuzzFeed News as part of a Freedom of Information Act request.

Over 40 pages of information regarding an interview with the “Kamikaze” rapper were turned over to Buzzfeed this week after the outlet filed a Freedom of Information Act request last year in response to an August 2018 song where Eminem alluded to the encounter, Fox News reports.

The Hill reports on one of the tracks, the 47-year-old performer, born Marshall Mathers, rapped of the commander in chief: “Time to bury him, so tell him to prepare to get impeached.”

The Secret Service, in the documents obtained by BuzzFeed, said the song was “exhibiting inappropriate behavior” and “threatens” their protectee.

Eminem — a fierce critic of the president — also took aim at other members of Trump’s family in various songs on the album, including Ivanka Trump and Melania Trump.

In the song “Framed,” Eminem rapped:

“Donald Duck’s on as the Tonka Truck in the yard
But dog how the f— is Ivanka Trump in the trunk of my car
Gotta get to the bottom of it to try to solve it
Must go above and beyond, ’cause it’s incumbent upon
Me, ’cause I feel somewhat responsible for the dumb little blonde girl
That motherf—in’ baton twirler that got dumped in the pond”

The information provided by the Secret Service noted that it was “not the first time Mathers made threatening comments towards [Trump] and his family,” citing a 2017 freestyle rap.

“Cause Agent Orange just sent the Secret Service / To meet in person to see if I really think of hurtin’ him / Or ask if I’m linked to terrorists / I said, ‘Only when it comes to ink and lyricists.’”

Agents made note in their records that, in June 2017, he had made comments about the president that were “threatening in nature.”

Two days after the interview, the Secret Service decline to refer the case to prosecutors, The Hill reported.

This just goes to show you that if you are a liberal, you can get away with anything but if you are a conservative you get censored and sent to hell.