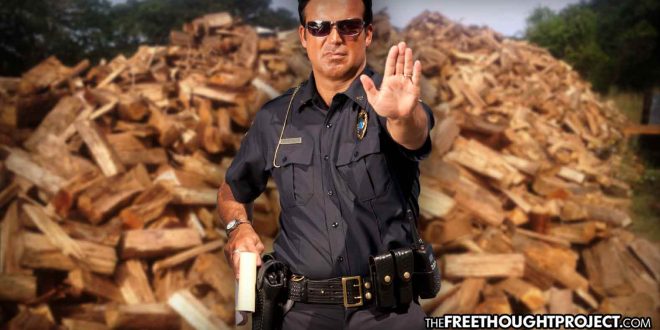 Lake Stevens, WA — In the land of the free, stacking firewood on your own property can and will lead to your extortion by government bureaucrats. You can be fined exorbitant amounts of money for this firewood even if you are collecting it to donate it to elderly, sick and struggling people to stay warm during the harsh winter. As TFTP has reported, if you refuse to pay these fines, you can and will be kidnapped. Or, if you resist this kidnapping, you may even be killed.

Shane McDaniel runs a charity on his own private property that collects downed trees from the local area and then cuts and splits it into firewood which is then delivered to those in need by volunteers. McDaniel has been doing this for years and was even featured on a local news show last year called Eric’s Heroes which earned him the nickname “Robinwood.”

McDaniel and his sons do most of the work and it takes them months of hard labor to get it all done.

“I couldn’t even tell you (how much),” McDaniel said. “I’ve gone through more chainsaw blades than I have in a lifetime. But it took about 8-months of hard work; it’s about 40 cords that we did, starting in March and finishing in September.”

Amazingly enough, they don’t even use a log splitter and do it all with just an axe.

McDaniel said they get a ton of offers for people to buy the wood, but he maintains that it is not for sale.

“I put a post out saying that we wanted to give the firewood away,” Shane McDaniel said. “We’ve had lots of offers to buy it, but there is no amount of money that would be worth swinging that axe 8,000… 8-million times. But donating it? That’s totally different.”

Last year, a Facebook post for the free wood went viral and the emails began pouring in. Haylie McDaniel, Shane’s wife, who works at the family’s store, said she gets chills from reading the messages coming in.

“There’s a lot of sad stories,” she said. “People that are sick, elderly… that have no other options.”

Shane said, “when I read these stories, it brings me to tears.”

But this valiant effort is now under threat thanks to the local bureaucracy. This month, McDaniel received a notice from the city threatening to fine him $35,000 every two weeks which works out to $2,500 every single day for the pile of firewood outside of his home.

Naturally, the local officials are claiming they must fine this charitable venture $35,000 every two weeks, to protect the community. Lake Stevens Mayor John Spencer says that the wood stacked on McDaniel’s private property is a fire hazard. By that logic, it seems that the mayor believes that if McDaniel simply pays $2,500 per day to the city, this will magically make the wood pile safe.

“We have a wood pile that represents a public risk,” Spencer said. “We have talked to him many many times, saying you need to move that pile but at this point he’s basically told us to blow off.”

According to McDaniel, the city has had a vendetta against him for years because he called out City Hall on a reader board at his store, claiming the city was misusing a building.

“That’s bull****,” Spencer said. “There’s no vendetta. What’s the vendetta? He’s a good guy. We’ve worked with him I don’t know what he’s talking about.”

The good news is that the cold season is here and most of the wood will start leaving McDaniel’s property in the next few weeks on its way to those in need.

McDaniel says most of the wood will be delivered by Christmas. In a likely attempt to avoid a public relations nightmare by fining a charity for delivering firewood, the city claims that if that happens, they will not fine him.

If you think McDaniel’s story is isolated, think again. As TFTP reported last year, citizens of Doraville, Georgia were forced to fight back against their city after they faced fines for “improperly stacked firewood.” The city has been named as a defendant in a lawsuit from residents who claim that they have received tickets and have even been threatened with arrest and sentenced to court-ordered probation for the crime of having a cracked driveway, chipped paint on their houses, and overgrown vegetation or improperly stacked firewood in their yards.