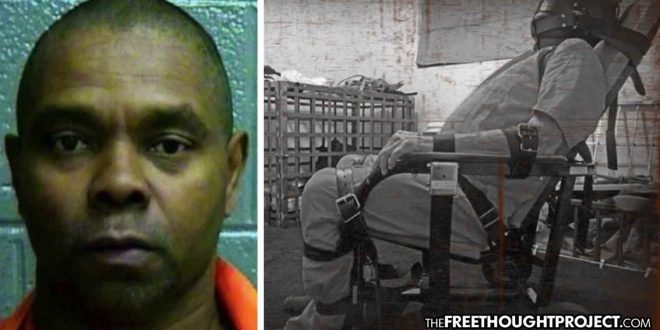 Enid, OK — The family of a man who spent his last days alive strapped in a restraint chair suffering a horrifying fate found out this week that they will be receiving $12.5 million as part of a settlement in the death of Anthony Huff.

In 2016, on June 4, Huff was arrested on charges of public intoxication. He was drunk. Instead of spending the night in the drunk tank and getting released the following day, Huff would spend several days in jail. Two days after he was booked into the Garfield County Jail, Huff would suffer from hallucinations due to the alcohol withdrawal. Instead of getting him help or letting him out to seek help, Huff was bound to a restraint chair—for days.

According to the lawsuit, Huff was neglected to death.

As News 4 Oklahoma reports, during his time in the chair, Huff was not given “proper amounts of food, water or medical treatment for illnesses he was suffering from,” a release from Oklahoma Attorney General Mike Hunter read.

Huff was strapped to the chair on June 6 and was found dead at some point on June 8 after being deprived of water and food. Huff, who was also prescribed medications for heart disease, hypertension, depression, and other conditions, was denied all of his medicine, according to the lawsuit.

The lawsuit states that jail personnel never received a medical recommendation to put Huff in the chair. It also states that officers never performed the required tasks such as checking blood pressure or even offer him water as they were supposed to be doing.

Now, the taxpayers of Garfield County will pay for the horrifying treatment of Mr. Huff.

“The Commissioners deeply regret that Mr. Huff passed away while he was being detained at the Detention Center, and extend their sincere condolences to Mr. Huff’s family,” a statement from the Garfield County Board of Commissioners read.

While $12.5 million may seem fairly high — because it is — the board states that juries have recently awarded similar amounts to families in other cases. Apparently this jail is a hot spot for in-custody deaths. After the settlement was announced on Tuesday, the board released the following statement in regard to the amount.

Suspiciously enough, Huff’s autopsy report concluded that he died of “natural causes” — because it is completely “natural” to be strapped in a chair for two days, denied food, water, and medication until you die.

Earlier this year, the former Garfield County jail administrator, Jennifer Shay Niles was found guilty of second-degree manslaughter. She was sentenced to just 55 hours in jail in May. This happens to be about 55 hours less than Huff spent in jail for being drunk in public and only a few hours more than he spent strapped to a chair until he died. Shameful indeed.

Sadly, TFTP has reported on other similar instances of people dying while strapped into these chairs. As we reported last year, video of an in-custody death was released confirming police officers tortured a man for days in a restraint chair and then laughed as he spent his final moments alive suffering in agony in his jail cell.

The footage, obtained by the San Luis Obispo Tribune, not only showed the graphic death of Andrew Holland in January 2017 but it also proves cops told the public a story that did not happen.

Holland was pronounced dead in his jail cell on Jan 22, 2017, only one hour after he was released from spending nearly two entire days strapped in a restraint chair. The Tribune received more than 100 hours of footage from the jail showing the horrific abuse Holland endured prior to his death.

Holland, 36, was a diagnosed schizophrenic who spent much of his adult life in and out of jail for minor offenses related to his mental illness. Prior to his death, he’d been locked up for resisting arrest. He spent most of this time locked in isolation in a tiny cell barely big enough for a twin mattress and a toilet.

According to the ‘official’ police report, Holland was “found unconscious and unresponsive” in his cell and prior to dying and he was “under the continual care of a physician” at the time. However, according to the video obtained by the Tribune, Holland was not unconscious at all. He was seen writhing in agony only moments before he lost consciousness and died. What’s more, no physician was constantly present during his 47 hours of torture. Had they been present, Holland may still be alive. The same goes for Huff.

Taxpayers on the Hook