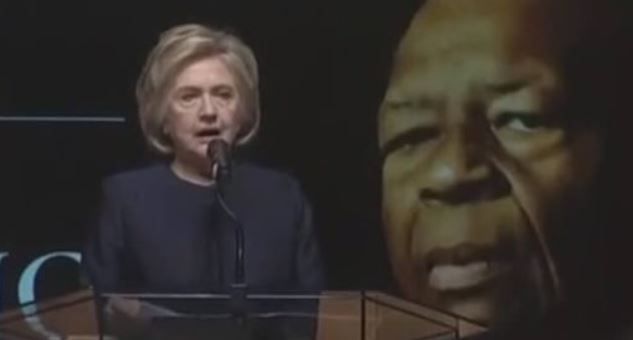 By Carmine Sabia at The FederalistPapers- OPINION

Hillary Clinton, who was defeated by President Donald Trump in 2016, cannot get over it and is continuing the world’s longest tantrum.

She has spoken about the election nonstop since her defeat, and on Friday she used the memorial service for the late Rep. Elijah Cummings to grind her ax.

She was speaking of the Elijah in the Bible, as a comparison to Rep. Cummings, and compared President Trump to the Bible’s evil King Ahab.

It is no coincidence, is it, that Elijah Cummings shared a name with an old testament prophet whose name meant in Hebrew, “The lord is my God.”

And who used the power and the wisdom that God gave him to uphold the moral law that all people are subject to.

And because of all people are equal. Like the prophet, our Elijah could call down fire from Heaven. But he also prayed and worked for healing.

He weathered storms and earthquakes but never lost his faith. Like that old testament prophet, he stood against corrupt leadership of king Ahab and Queen Jezebel.

And he looked out for the vulnerable among us. He lifted up the next generation of leaders. He even worked a few miracles.

And he kept reminding us, life is no dress rehearsal. The American people want to live their lives without fear of their leaders.

And as leaders, we have a responsibility to keep the promises made when running for office to make the lives of Americans better.

As Elijah said, while we’re all on this Earth. That’s my message. Our Elijah was a fierce champion for truth, justice, and kindness in every part of his life.

His integrity and character, his can-do Spirit made him a guiding light in the Congress. He pushed back against the abuse of power.

He was unwavering in his defense of our democracy. He had little tolerance for those who put party ahead of country or partisanship above truth.

Even his political adversaries recognized that it wasn’t really about Politics for our Elijah. He led from his soul. He often said that our children are a message to a future we will never see.

I saw that firsthand when I attended an event for the Elijah Cummings youth program in Israel. A leadership program for young people in his district.

And Elijah didn’t just put his name on the program and then forget about it. He interviewed every applicant.

He was personally invested in their success. He wanted all of us to see our young people as he memorably asked us to do when he gave the eulogy at the funeral for Freddie Gray.

Did you see him? By the time these young people came back from Israel to Baltimore, they had learned shabbat, studied Hebrew, hiked up Masada.

They had been seen and unseen and made lifelong friends, all because Elijah Cummings knew from his own experiences that it’s one thing to learn abstractly about the world but another to experience it with people different from yourself, learning from each other, lifting each other up.

You know, Elijah often said his philosophy was simple — do something. Go out and do something. No matter how daunting a problem seems, no matter how helpless you feel, surely, there is something you can do. I think that remains his challenge to each of us.

You can lift up others. And toward the end of his life, he said, “I am begging the American people to pay attention to what is going on, because if you want to have a democracy intact for your children and your children’s children and generations yet unborn, we have got to guard this moment. This is our watch.”

Our Elijah knew because he was a man of faith and a man of the church, that life was fleeting and precious, and that’s why he worked so hard to make every moment of his life count. When we’re dancing with the angels, the question will be asked, he said in 2019, what did we do to make sure we kept our democracy intact?

I will end with the paraphrase of a poem that Elijah recited in his very first speech in the Congress. He said that he told himself this poem as many as 20 times a day. I only have a minute, 60 seconds in it, forced upon me, I did not choose it, but I know that I must use it.

Give account if I abuse it, suffer if I lose it, only a tiny little minute, but eternity is in it. Thank you, Elijah Cummings, for your work, your service, and the lessons you leave us. God bless you.”