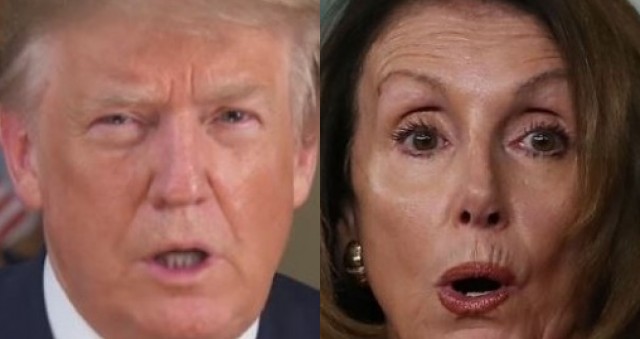 (TNS) The Trump administration finally went on offense this week, announcing that the ‘review’ of the origins of Obama’s “Russian collusion” probe, a.k.a. “Spygate,” had now become a criminal investigation after Attorney General William Barr and U.S. Attorney John Durham, obviously, found enough evidence to warrant one.

On Saturday, the president kept the heat up on the head of the Garbage Party and its leader, Nancy Pelosi, who is too afraid to call for an actual impeachment inquiry into the president because she knows it’ll hurt her members in red state districts Trump won like a boss in 2016.

Instead, Pelosi’s been content to pretend like the House is conducting one — complete with secret hearings and behind-closed-doors proceedings of the kind that were outlawed in the mid-1600s by the English Crown and ditched by our founders because they are unfair as hell.

Trump took to Twitter to remind everyone that a) Pelosi really does have better things to do; and b) they include cleaning up her own filthy district in San Fran, which has turned into an apocalyptic nightmarish hellhole filled with homeless people, human waste, garbage, and disease.

Of course, Pelosi and her husband are immune from the literal feces on the streets that they enable because…gated community…and oh by the way, she’s a member of the 1 percent ($120 million and counting…how does that happen on a House salary of $174,000/year (her pay got boosted to $223,500/year as Speaker — still far more than the average American makes).

POTUS tweeted- “I can’t believe that Nancy Pelosi’s District in San Francisco is in such horrible shape that the City itself is in violation of many sanitary & environmental orders, causing it to owe the Federal Government billions of dollars – and all she works on is Impeachment. We should all work together to clean up these hazardous waste and homeless sites before the whole city rots away. Very bad and dangerous conditions, also severely impacting the Pacific Ocean and water supply. Pelosi must work on this mess and turn her District around!”

….We should all work together to clean up these hazardous waste and homeless sites before the whole city rots away. Very bad and dangerous conditions, also severely impacting the Pacific Ocean and water supply. Pelosi must work on this mess and turn her District around!

Once upon a time, before Donald Trump took on the establishment scumbags to become the first ‘people’s president’ since the dawn of the republic, Leftists cared about things like ‘the environment.’

Now, Trump Derangement Syndrome instinctively leads them to oppose every single thing President Trump supports, even if it means putting up with and ignoring third-world conditions as though they were normal in a first-world country.

Meanwhile, the president is doing exactly the right thing: Calling out these lunatic Democrats for their failed policies that are leading to the destruction of our biggest urban centers.

At some point, we tend to believe his criticisms will be effective.