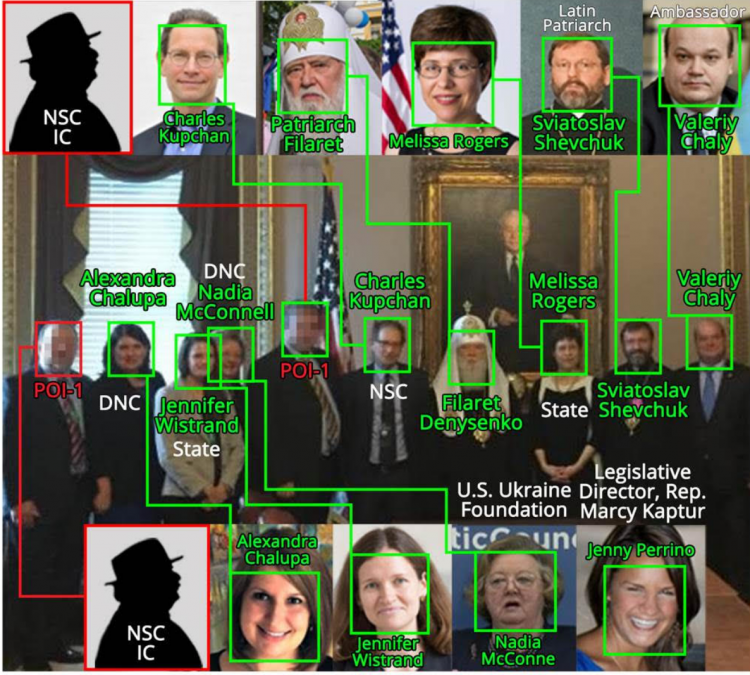 And the hits just keep a’comin. It’s a race for the truth.

The bottom line is this “impeachment” theater is just that, theater – a deliberate distraction from the real story, the Obama led coup against America, free and fair elections and a duly elected president.

Lying Adam Schiff may have himself in a real pickle. If his CIA ‘whistleblower’ was spying on President Trump on behalf of Schiff, then they both could be held accountable for conspiracy and treason under the Espionage Act.

Chanel Rion on OAN had an excellent piece on suspected CIA ‘whistleblower’ and leaker Eric Ciaramella and Shifty Schiff. Both could be guilty of ‘seditious conspiracy to overthrow a sitting President’, the penalty for which is not good –

I bet the Mastermind of the Operation is John Brennan.

WE ALSO PREVIOUSLY REPORTED THAT THERE ARE MANY CONNECTIONS TO THE DEEP STATE’S ACTIONS IN THE UKRAINE AND OBAMA DURING HIS TENURE. THE PICTURE BELOW SHOWS NUMEROUS INDIVIDUALS CONNECTED TO OBAMA AND THE UKRAINE. CHARLES KUPCHAN IS IDENTIFIED BELOW (SEE MORE ON HIM HERE) AND HE HAS BEEN SUSPECTED OF BEING CONNECTED TO THE WHISTLEBLOWER AS WELL. HE WAS REPORTEDLY CIARAMELLA’S BOSS FOR A TIME –

Kupchan is personal friends with Hillary’s ‘fixer’ Sid (Vicious) Blumenthal, per Blumenthal’s own words in an email released by WikiLeaks –

maybe I should write a Thread on these Traitors… with the full list https://t.co/w79nAUuQE9

There now appears to be agreement on the Internet that Ciaramella is Shifty Schiff’s ‘whistleblower’.  Ciaramella was very close to VP Joe Biden –

Ukraine is an 'Eastern European' nation…

Joe Biden and his son Hunter know something about Ukraine…
. pic.twitter.com/8qhR6Mv0a8

Charles Kupchan was Ciaramella’s boss. Kupchan was “Senior Director for European Affairs” at Obama’s National Security Council. He also held the title of “Special Assistant to President Obama”. This title looks impressive but we really don’t know what he did for Obama.

4. but Charles Kupchan was not just 'Senior Director for European Affairs'
at the National Security Council.

Special Assistant >> in WHAT ??
. pic.twitter.com/BwsKL07omI

6. before being 'Special Assistant to President Obama',
Charles Kupchan was 'Director for European Affairs'
on the National Security Council, during the first Bill Clinton Administration.

They are clearly well connected to John Brennan as well –

17. John Brennan, Susan Rice, Eric Ciaramella and Charles Kupchan all know each other well – even today – and are closely related together.

Ciaramella was retained in the White House by General McMaster –

19. who DECIDED to retain Eric Ciaramella?
and even promoted him?

McMaster was a disaster.  We’d all like to know who suggested President Trump hire McMaster.  Mike Cernovich was the one who outed McMaster and Ciaramella –

Eric Ciaramella was fired from the National Security Council sometime in June or July 2017, thanks to Mike Cernovich, who exposed him – God bless Mike!
Mike @Cernovich

but it was too late.
The damage was done.

23. Abigail Grace worked at the National Security Council under both Obama and Trump, as an expert in US-China relations, from 2016 to 2018.

Abigail Grace was recruited by Adam Schiff in February 2019.
. pic.twitter.com/kiWbmsAkFa

25. Eric Ciaramella, Sean Misko and Abigail Grace were all colleagues in the National Security Council,
both during the Obama Administration, both in the Trump Administration.

All three are Obama HOLDOVERS.

27. and their hiring by Adam Schiff speak volumes…

McMaster to Schiff – what horrible people to be around –

29. by the way…
I find it interesting that the WHOLE INTERNET has been scrubbed of any photo/image of Eric Ciaramella – and of any useful info on that guy.

only TWO Agencies can do that:
the NSA and the CIA.

I point the finger to the 2nd…

And as always, all roads lead back to Brennan and Obama –

31. here is my [THREAD] on a State Lunch that took place in Oct 2016
guests: Eric Ciaramella
& John Brennan, James Clapper, James Comey, Joe Biden, Nancy Pelosi, Susan Rice
in honor of Italian Spygate PM Renzi
(yes it was a lunch, not a dinner)https://t.co/ovtvaq49AE

Looking further into the Special Assistant to President Obama, Charles Kupchan, we found an article by him in September arguing against nationalism.  (It’s really one of the most revolting pieces I’ve read in ages!)

Full or rage and lies, Kupchan never discloses his special relationship to Obama but instead spews a grotesque diatribe of hate for President Trump and Americans who voted against everything Obama.  Here are some pieces from his rant –

To be sure, our moment remains one of great peril for liberal democracy and pluralism. Johnson, Italian hard-right leader Matteo Salvini, U.S. President Donald Trump, Hungarian Prime Minister Viktor Orban, and their many fellow travelers have revealed just how susceptible North America and Europe are to base political instincts. It remains shocking that the British prime minister seems determined to inflict upon his country a no-deal exit from the European Union—an egregious, destructive act of self-isolation. Or that the U.S. president regularly insults immigrants, has called Haiti and African nations “shithole countries,” and took a liking to neo-Nazi marchers in Virginia. Or that Salvini, Italy’s most popular politician and former deputy prime minister, has called for a “mass cleansing” of immigrants from the nation’s cities in defense of a Christian Europe….

Yes, Democrats did take back the House of Representatives last year, and have been trying to check the White House ever since—most recently through efforts to examine documents that would shed light on allegations that Trump pressured Ukraine to produce political dirt on former U.S. Vice President Joseph Biden, a top Democratic contender for the 2020 presidential nomination. But Trump continues to do enormous damage at home and abroad as he tramples on democratic ideals and practices.…

But the Republican Party’s abandonment of its traditional stance on issues such as the deficit, trade, and immigration, as well as its abdication of its duty to govern responsibly, come at a high cost. Trump’s foreign policy is setting the world on edge. At home, his white nationalism, anti-immigrant rants, and flouting of republican ideals threaten U.S. democracy and the pluralism that sustains social cohesion amid racial, ethnic, and religious diversity….

Charles Kupchan is clearly a liberal hack with a gift for spewing hate and liberal lies.  He clearly hates President Trump for destroying all of Obama’s policies of domestic destruction and foreign failures.

It’s clear why Kupchan was close to Obama and why he’s connected to the ‘whistleblower’ – he hates President Trump.  A man with a mind like this would be happy to be involved in a treasonous plot to undermine US democracy and a President (Trump) who stands for the American people.