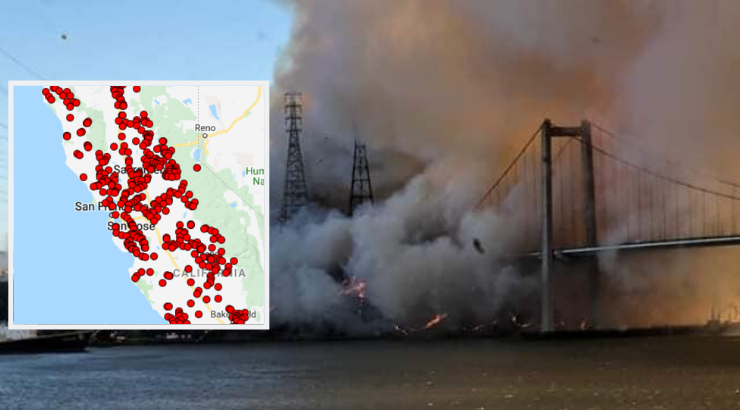 As historic fires rage across California, a new investigation has found that equipment belonging to Pacific Gas & Electric (PG&E)—the main electric utility company in the state—may have been at fault in contributing to over 400 fires in the state in 2018 alone.

The information comes from the massive investor-owned electrical monopoly itself, which was required to submit fire incident reports to regulators with the California Public Utilities Commission (CPUC), reports KTVU 2 Investigates.

On Sunday, California Gov. Gavin Newsom declared a statewide emergency as major fires continued to consume land, destroy homes, and cause hundreds of thousands of evacuations from fire-threatened regions in the north and south of the state.

As of Monday afternoon, the Kincade Fire in Sonoma County grew to over 66,000 acres, turning California’s Wine Country into a blazing inferno as brutal winds continued to fan the flames. The fire is only 5 percent contained—down from 10 percent the previous day—and officials say the fire won’t be contained until November 7.

Sutter Santa Rosa Regional Hospital and Kaiser Permanente Hospital have both evacuated patients from Santa Rosa, the Sonoma County seat was devastated by fires only two years ago. About 3,000 firefighters are on hand working to put out the Kincade Fire, according to Newsom.

On Thursday, PG&E filed an incident report with the CPUC revealing that one of its own broken jumper wires was found on a transmission tower near the wildfire, raising questions about its role in the latest major blaze.

PG&E’s CEO Bill Johnson claims that the report is not necessarily an admission of guilt or proof of what caused the fire, but was being “shared … out of a sense of transparency.”

Beyond the fire zones, roughly one million PG& E customers are without power—965,000 due to the controversial Public Safety Power Shutoff the utility announced last week, and roughly 100,000 more for other reasons, said PG&E incident commander Mark Quinlan.

According to a Cal Fire investigation, the company was in fact responsible for the fire. PG&E has also acknowledged that it is “probable” that the company’s equipment started the deadly blaze.

Widespread anger toward the utility has even resulted in isolated incidents of violence toward company employees.

In January, PG&E filed for bankruptcy over $51.69 billion in debts that accrued over the liabilities and wildfire-related claims that followed the deadly Northern California fires of 2015, 2017 and 2018 which were a result, either directly or in direct association with, the company’s equipment.

In August, a federal bankruptcy judge slammed the company for proposed compensation packages amounting to as much as $16.3 million being distributed to its executives despite the fact that they oversaw a corporate culture that led the most destructive fires in the state’s modern history.

The judge denied the corporation’s proposal to pay the exorbitant bonuses to its top executives in late August. However, in April, the same judge told the company it could give $235 million in bonuses to roughly 10,000 employees as part of its short-term incentive program.

Paired with the generous bonuses it has attempted to hand over to executives, PG&E has increased the bills of its customers.

Earlier this month, electricity bills increased by an average of $3.07 a month while natural gas bills rose by $1.73, reports the Sacramento Bee.

While the company claims the rate hikes were meant to ensure public safety, its proposal to CPUC in April included a request to boost its return on equity—to maximize investor profits.

PG&E is requesting massive increases in costs to ratepayers in order (to) generate profits for investors—all while wildfire victims sit in bankruptcy.

The governor strongly believes ratepayers shouldn’t be on the hook for unnecessary increases as the state’s process plays out.

In recent months, jurisdictions have also mulled purchasing existing PG&E infrastructure in a bid to control the power delivered to homes, government facilities, hospitals, and businesses as the company faces increased financial and political turmoil.