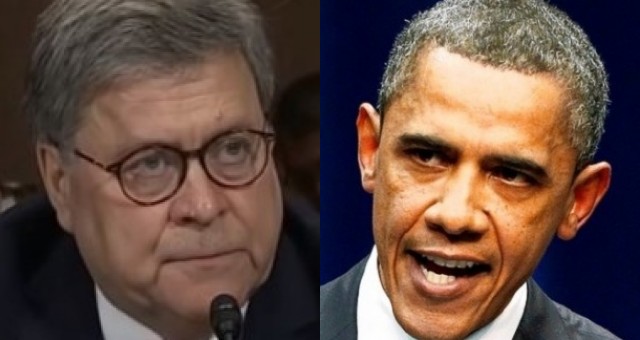 (TNS) For those of you who still believe that no one’s going to be held responsible for the Obama-era operation to depose President Donald Trump and transform our government into a third-world banana republic where sedition and treason are rewarded, we beg to differ.

We think the big one is ready to go down and in a big way, too. Why? Because of Attorney General William Barr.

According to an exclusive report by One American News (who else?), an early figure in Spygate — former FBI lead counsel James Baker — has flipped and is assisting Barr, U.S. Attorney John Durham, and others in the pursuing criminal charges against a host of deep staters involved in devising and carrying out Spygate.

OANN correspondent Jack Prosobiec interviewed Ned Ryun, head of American Majority, a non-profit combatting the Garbage Party’s attempts to turn red states blue, who said that, according to his sources, Baker didn’t play a willing, cognizant part in the god king Obama’s plot to overturn the 2016 election in favor of Hillary.

Rather, Baker was relying on information he was being fed by traitors like James Comey, Andrew McCabe, Peter Strzok, Lisa Page, and others in pursuing FISA court warrants and other shady legal and counterintelligence actions against the 2016 Trump campaign.

Other interesting facts about Baker:

— He told Congress during closed-door testimony he believed Hillary should have been indicted for her serial mishandling of classified information;

— He has said he never trusted the veracity of the bogus “Steele dossier;”

— He was concerned about what he described as the abnormal handling of the fabricated probe into the 2016 Trump campaign.

Ryun also believes that Durham has, some time ago, already convened a grand jury, which means we ought to see some subpoenas and even indictments soon.

No wonder Garbage Party sycophants and former Obama enablers are scrambling like cockroaches.

It’s an outstanding interview and it’s not one you’re going to see on any major network, for damned sure — including Fox News. OANN is an investigative journalism boss like that.

While watching this short report, keep in mind what Ryun says about how the American system of intelligence, justice, and the pursuit of evidence has to exist on trust or there is no system.

Also keep this in mind: Obama willingly and brazenly abused our trust by politicizing the process and exploiting individuals within the system who were already prone to screwing our country and its people over with their intimate knowledge of ‘the system’ and how it works in ways that we were never supposed to know about.