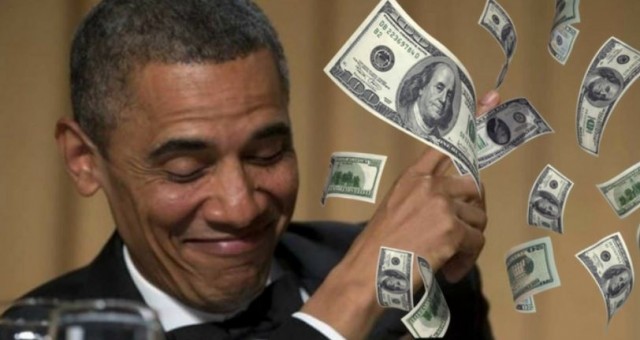 A Saudi national allegedly sent hundreds of thousands of dollars to the U.S. to help pay for then-President Barack Obama’s 2012 inauguration, court documents and campaign finance records reviewed by The Associated Press show.

Sheikh Mohammed Al Rahbani sent his donation to a Los Angeles-based middleman, venture capitalist Imaad Zuberi, the AP reported, based on those records.

One $100,000 donation from Rahbani allegedly funneled through Zuberi intended for Obama’s inaugural committee was marked “photos,” the AP reported Tuesday.

“AP Exclusive: Documents show that a wealthy Saudi tycoon sent hundreds of thousands of dollars to the U.S. to help pay for President Obama’s second inauguration with the assistance of a middleman.”

AP Exclusive: Documents show that a wealthy Saudi tycoon sent hundreds of thousands of dollars to the U.S. to help pay for President Obama's second inauguration with the assistance of a middleman. https://t.co/VeRFm3VTHj

“I’m deeply concerned about foreigners trying to intervene in our elections, and I don’t think we’re doing enough to try to stop it,” Federal Election Commission Chairwoman (FEC) Ellen Weintraub told AP. “They don’t get a say in who we elect — or at least they’re not supposed to.”

Under federal law, foreign nationals cannot make political contributions to candidates running for any office or to a presidential inaugural committee.

Foreign nationals are prohibited from “activity in connection with elections in the United States,” including “making any contribution or donation of money” or other form of payment “in connection with any federal, state or local election in the U.S.” and from “making any donation to a presidential inaugural committee,” according to the FEC.

Zuberi, 49, agreed to plead guilty for illegally donating hundreds of thousands of dollars to various U.S. political candidates — both Republicans and Democrats — on behalf of foreign nationals like Rahbani, among other charges, according to an Oct. 22 press release from the Department of Justice.

Donations linked to the venture capitalist were traced back to politicians such as New York Democratic Rep. Eliot Engel and South Carolina Republican Sen. Lindsey Graham, though Graham returned some of the donations linked to Rahbani through Zuberi, AP reported.

“Zuberi’s multi-faceted scheme allowed him to line his pockets by concealing the fact that he was representing foreign clients, obtaining access for clients by making a long series of illegal contributions, and skimming money paid by his clients,” U.S. Attorney Nick Hanna said in an Oct. 22 statement, according to the release.

“Zuberi circumvented laws designed to insulate U.S. policy and our election process from foreign intervention. This investigation has halted his illegal conduct, will result in several felony convictions, and could send him to prison for a lengthy period of time,” Hanna’s statement continued.