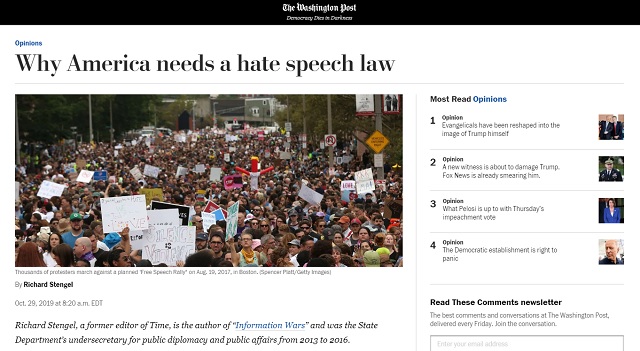 America needs to scrap the First Amendment to fight the Russians and protect the feelings of minority groups as the Founding Fathers would have wanted us to do, according to a column published Tuesday in the Washington Post.

Richard Stengel, a former editor of Time, is the author of “Information Wars” and was the State Department’s undersecretary for public diplomacy and public affairs from 2013 to 2016.

It is important to remember that our First Amendment doesn’t just protect the good guys; our foremost liberty also protects any bad actors who hide behind it to weaken our society. In the weeks leading up to the 2016 election, Russia’s Internet Research Agency planted false stories hoping they would go viral. They did. Russian agents assumed fake identities, promulgated false narratives and spread lies on Twitter and Facebook, all protected by the First Amendment.

The Russians understood that our free press and its reflex toward balance and fairness would enable Moscow to slip its destructive ideas into our media ecosystem. When Putin said back in 2014 that there were no Russian troops in Crimea — an outright lie — he knew our media would report it, and we did.

Translation: “We’re desperate to regain control of the narrative and need to start throwing dissidents in prison for thought crimes if we hope to turn this ship around.”

That’s partly because the intellectual underpinning of the First Amendment was engineered for a simpler era. The amendment rests on the notion that the truth will win out in what Supreme Court Justice William O. Douglas called “the marketplace of ideas.” This “marketplace” model has a long history going back to 17th-century English intellectual John Milton, but in all that time, no one ever quite explained how good ideas drive out bad ones, how truth triumphs over falsehood.

Milton, an early opponent of censorship, said truth would prevail in a “free and open encounter.” A century later, the framers believed that this marketplace was necessary for people to make informed choices in a democracy. Somehow, magically, truth would emerge. The presumption has always been that the marketplace would offer a level playing field. But in the age of social media, that landscape is neither level nor fair.

On the Internet, truth is not optimized. On the Web, it’s not enough to battle falsehood with truth; the truth doesn’t always win. In the age of social media, the marketplace model doesn’t work. A 2016 Stanford study showed that 82 percent of middle schoolers couldn’t distinguish between an ad labeled “sponsored content” and an actual news story. Only a quarter of high school students could tell the difference between an actual verified news site and one from a deceptive account designed to look like a real one.

It’s truly hilarious hearing the biggest liars on the planet in a paper controlled by the world’s richest man claim they’re guardians of “truth” and the “free press” while calling for people to be imprisoned for thought crimes.

Domestic terrorists such as Dylann Roof and Omar Mateen and the El Paso shooter were consumers of hate speech. […]

Why shouldn’t the states experiment with their own version of hate speech statutes to penalize speech that deliberately insults people based on religion, race, ethnicity and sexual orientation?

How about we “experiment” with sedition laws for those who want to undermine the Bill of Rights instead?