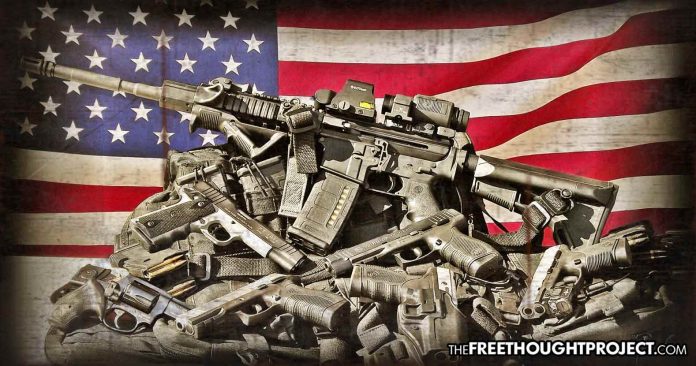 Tallahassee, FL — According to Florida state law, Statute 790.335, “no state governmental agency or local government, special district, or other political subdivision or official, agent, or employee of such state or other governmental entity or any other person, public or private, shall knowingly and willfully keep or cause to be kept any list, record, or registry of privately owned firearms or any list, record, or registry of the owners of those firearms.” Government agencies found in violation of this law, who keep lists of firearms owners, are committing a felony, according to the legislation. Nevertheless, cops in Florida were caught doing just that.

A recent discovery by Ammoland.com, alleges that police in Florida are using information to compile these unlawful lists of gun owners in the state — a direct violation of Florida law. Moreover, despite getting caught red-handed, the Charlotte County State’s Attorney’s Office determined that the Charlotte County Sheriff’s Department did not violate any laws in compiling the lists.

The department was able to create these lists because of an apparent glitch in the system. As Ammoland reports:

Pawnbrokers are required to enter information on firearms transactions into the FINDER system. The system transmits the serial number of the firearm along with the make and model to the local sheriffs’ department to make sure that the person pawning the gun, did not steal it. A bug in the system also transmitted the names and addresses of the transfers to local law enforcement. The Charlotte County Sheriff’s Department used the information to create a list of gun owners.

While the initial discovery exposed the Charlotte County Sheriff’s Department, according to Ammoland, this corruption extends to other departments throughout state. According to reporter Andrew Sheets, who helped uncover this abusive tyranny, there are emails from the Charlotte County Sheriff’s Department detailing how the department shares this information with other law enforcement agencies.

The North Port Police Department and the Sarasota Sheriff’s Office have both been implicated in the abuse scandal.

According to Sheets, the sheriff’s department had no problem emailing him a completely unredacted list of pawn shop transactions via email. Ammoland points out that this file contains not only information about the firearm, but also the names of the person pawning the gun, putting them at risk of robbery and violating their privacy rights.

Florida law lays this out clearly, specifically pointing out why these lists are illegal. Not only do they have the potential for abuse by law enforcement agencies but they also put gun owners at risk by making them targets of robbery.

“A list, record, or registry of legally owned firearms or law-abiding firearm owners is not a law enforcement tool and can become an instrument for profiling, harassing, or abusing law-abiding citizens based on their choice to own a firearm and exercise their Second Amendment right to keep and bear arms as guaranteed under the United States Constitution. Further, such a list, record, or registry has the potential to fall into the wrong hands and become a shopping list for thieves,” the law states.

The law even states that such a list is not a good tool in the fight against terrorism.

Also, according to the law, those whose names end up on these illegal lists are entitled to redress which means everyone on those lists may come back and sue these departments and win.

According to the report, the list “glitch” is being blamed on poor programming and the IT company who maintains the FINDER system has since remedied this situation. While this may be a legitimate excuse, the Free Thought Project has spoken with gun store owners — who wish to remain anonymous — who were approached by law enforcement agencies in the past and asked to secretly turn over this information, knowing full well that it was illegal. They were even offered money. Our sources say they denied the offer.

The good news is that even though the Charles County State’s Attorney’s office found that the police departments did not violate the law with the list, because of the media exposure generated by Ammoland and Florida Carry, State Attorney Amira Fox’s office has now opened an investigation into the origin and background of the failure of the FINDER system.

The hubris of the law enforcement system exhibited by investigating themselves and finding they did nothing wrong in this obvious abuse is palpable. However, it should come as no surprise. Just last month, TFTP reported on a police officer in Florida who threatened to carry out mass shootings — twice — and he faced no charges and was not red flagged. Law enforcement in Florida is notorious for corruption.