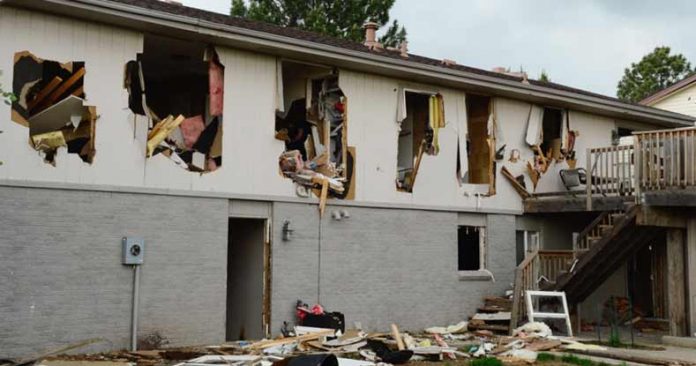 Greenwood Village, CO – A Federal Appeals court has granted police new powers for which they will not be held accountable. They can now completely destroy your home and they will not have to pay for it. That’s what happened to Leo Lech’s home in 2015 after a shoplifter — accused of stealing a shirt — illegally entered his home, forcing Greenwood Village SWAT to go room by room ransacking the place with explosives.

The 19-hour standoff ended with the suspect being taken into custody, but not before the home, as TFTP previously reported, was destroyed. The place looked like it was hit with a bulldozer. None of the windows were intact, and the doors were blown off their hinges. The Lech family’s possessions were completely destroyed, left in tatters after the SWAT team showed no concern for the home nor its belongings. According to the DailyMail:

Greenwood (police) fired gas munition and 40-millimeter rounds through the windows of his home in the June 2015 standoff with the shoplifter who had barricaded himself inside. Cops even went as far as driving an armored vehicle through the doors, tossed flash-bang grenades inside and detonated explosives in the walls of the property.

Initially, the Lech family was offered $5,000 in housing assistance and insurance deductible compensation, a far cry from what it would take to simply raze the home, let alone rebuild it. Leo Lech sued the city, but the court ruled what happened to the home did not amount to eminent domain and was simply a result of a police matter. Therefore, the city was under no obligation to condemn the home nor rebuild it. In other words, apart from the $5000, Lech was getting nothing else. Lech commented in 2015:

If you look at the photos of Osama Bin Laden’s compound, I would say his house looks better than mine does.

Lech appealed the decision to a higher court but on Wednesday was denied, yet again. He says he’s now going to appeal to the Supreme Court of the United States and he has a lot more to say about how police upended his life and the lives of his other family members.

Leo Lech was renting the destroyed home to his son John, his girlfriend, and their son. Far from being a tenant in a rental home, when police destroyed all of John’s possessions along with his dwelling, he says he was forced to live with his parents, find another job, and force his son to attend another school. The chaos which ensued from the SWAT melee which included an estimated 50 officers, truly caused the family an enormous amount of discomfort the family says. And, rightfully so, they are upset, to say the least. On Tuesday, Lech told the Washington Post:

It just goes to show that they can blow up your house, throw you out on the streets and say, ‘See you later. Deal with it,’…What happened to us should never happen in this country, ever.

It’s true America. We don’t know whether to categorize it as the effects of a Police State or Judicial Tyranny, but one man’s quest to get his home rebuilt by the very police department which completely destroyed it with grenades, explosives, gas canisters, battering rams, and an armored personnel carrier (typically used by the military), ended in defeat.

In the land of the free, the cops can now destroy your home completely and you’ll be left to pick up the pieces. Hopefully, Lech and his lawyers will appeal to the SCOTUS and the dangerous precedent will be overturned.