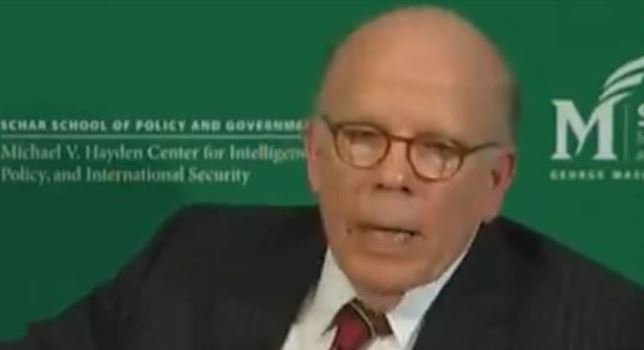 We have written about the ‘Deep State‘ for a long time and now one of the former directors of the CIA has admitted that the DEEP STATE does indeed exist.

Former Acting CIA Director John McLaughlin indicated on Wednesday that he was grateful for the “deep state’s” role in prompting the impeachment inquiry into President Trump, Fox News reports.

CBS reporter Margaret Brennan had noted to McLaughlin that the origin of the impeachment inquiry likely furthered Trump’s concerns about the “deep state”.

“There is something unique you have to agree that now that the impeachment inquiry is underway, sparked by a complaint from someone within the intelligence community, it feeds the president’s concern, an often-used term about a ‘deep state’ being there to take him out,” she said.

“I mean I think everyone has seen this progression of diplomats and intelligence officers and White House people trooping up to Capitol Hill right now and saying these are people who are doing their duty or responding to a higher call,”he said.

TAKE A LOOK AT THIS!

WOW! There you have it!

The former intelligence official was speaking at an event hosted by George Mason University, joined by former Deputy FBI Director Andrew McCabe and former CIA Director John Brennan — both of whom have been critical of the president.

“With all of the people who knew what was going on here, it took an intelligence officer to step forward and say something about it, which was the trigger that then unleashed everything else,” McLaughlin said.

He was referring to the fact that an intelligence officer filed the whistleblower complaint about President Trump’s July call with Ukraine — a conversation Democrats have described as showing Trump inappropriately asked a foreign country to interfere in the 2020 elections by investigating his political rival.

So there you have it- THERE IS A DEEP STATE AND THERE IS JUST MORE FROOF!