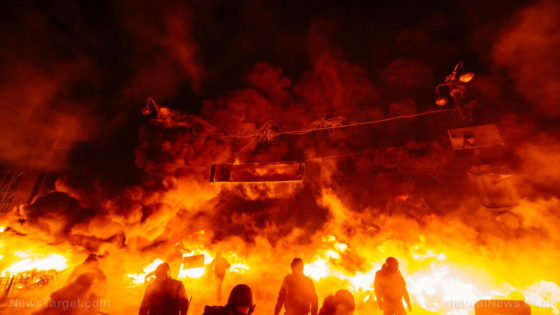 A tweet from President Donald Trump last month is still hitting a little close to home for voters. A new poll is suggesting that Trump’s tweet saying a Civil War would begin if he is impeached is accurate.

Facing the threat of impeachment, Trump quoted Pastor Robert Jeffress in a tweet saying “if the Democrats are successful in removing the President from office (which they will never be), it will cause a Civil War like fracture in this Nation from which our Country will never heal.”

….If the Democrats are successful in removing the President from office (which they will never be), it will cause a Civil War like fracture in this Nation from which our Country will never heal.” Pastor Robert Jeffress, @FoxNews

According to the Georgetown Institute of Politics and Public Service survey, the average American voter believes the U.S. is two-thirds of the way toward the “edge of a civil war.” The poll asked voters to rate the division in the country from zero to 100, with 100 being defined as the “edge of civil war.”

The average response came in at 67.23. –Market Watch

“Restoring a higher level of civility to our politics will take a dedicated and courageous group of Republicans, Democrats, and members of the media to reject the easy tactics of uncivil rhetoric that paints opponents as enemies,” Republican Ed Goeas of the Tarrance Group said in the release. Unfortunately, civility doesn’t sell.  It’s also hard to convince people to vote when everyone turns on the government and starts actually caring for and supporting each other instead.

The respondents also don’t exactly know what they want.  They say they want compromise in government, but they also want their political party to stand up to the other one. “Our Civility Poll finds that 80% of voters say that they both demand compromise from political leaders, but want political leaders who will stand up to the other side,” said Mo Elleithee, executive director of the Georgetown Institute of Politics and Public Service. “That creates mixed messages for even the most skilled political leader trying to decide whether to be a fighter or a dealmaker.”

The poll, which interviewed 1,000 registered voters, also showed most Americans believe the political, racial and class divide is widening. The source of that division, of course, depends on which side of the aisle answered the question, reported Market Watch.