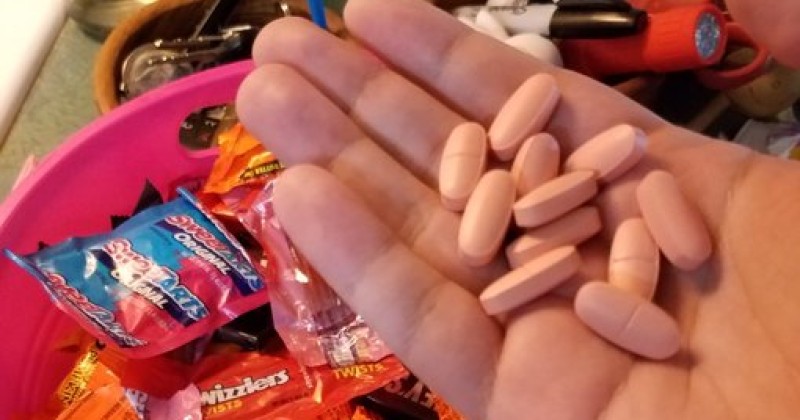 Even if Trump were the worst thing to happen to America ever, as some claim, would that excuse poisoning kids who dressed like him on Halloween?

This is just more evidence that Antifa is a terrorist organization of the worst kind.

These are terrorists writing their own rules and young males can never be trusted for that.

Here’s more from PJW at Infowars:

“If I see any children dressed up in some #MAGA type of costume like this little worm, I’m going to be giving them my special #Fentanyl laced candy. #ANTIFA action!” tweeted @Djenkounchained, alongside a poster of a young boy dressed as the president with death crosses over his eyes.

If I see any children dressed up in some #MAGA type of costume like this little worm, I’m going to be giving them my special #Fentanyl laced candy. #ANTIFA action!

“Adding #fentanyl pills to my halloween candy for the #MAGA children to eat,” the individual subsequently tweeted, with an image of pills about to be dropped into a bag of chocolate bars.

Adding #fentanyl pills to my halloween candy for the #MAGA children to eat pic.twitter.com/QMepZ2PVEr

Attempting to poison children to own the Trump supporters. Stunning and brave.

So much for the tolerant left!

The problem is that the leftist politicians refuse to shut Antifa down or even condemn them.

They don’t even want to acknowledge the problem.

Do we really want these people leading our country in 2020?

Antifa is a group of terrorist thugs.

If you think Antifa is bad now, wait until after 2020 elections.

If Dems win they will seek to further enforce their agenda, knowing a Dem President has their backs.

If Dems lose they will be taking their frustrations out all over America.

They are already doing that, so imagine how bad it will be WHEN Dems lose.

We need a bipartisan effort, like that will ever happen, to declare war on those who have declared war on America.