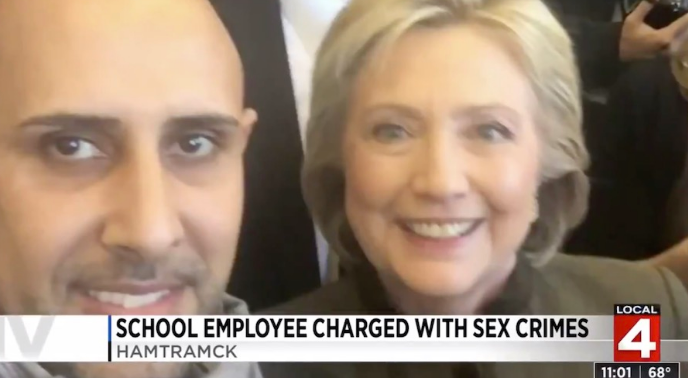 A Michigan high school employee is in the news.

It seems that Ibrahim Aljahim put a special needs student into a sexual situation and stands accused of sexual assault.

Details can be found in a full write up below.

Aljahim also happened to be a strong supporter of Hillary Clinton and her fellow Democrats.

Here is the video, which will be followed by the “not suitable for everyone” details we have at this time.

If you don’t want those gross details, you might want to leave now.

The incident happened in late September and we can thank our heavily censored media for only hearing about this about 5 weeks later.

Hamtramck student alleges he was sexually assaulted by school employee, a Dem activist

Ibrahim Aljahim, 37, is charged with two counts of criminal sexual conduct involving 18-year-old male student at a school in Hamtramck.

A student at a Hamtramck high school testified Thursday that a school employee who’s also a Democratic community activist engaged in oral sex with him in a car outside the school.

The student spoke at a preliminary hearing in 31st District Court in Hamtramck in the case of Ibrahim Aljahim, 37, who was charged last month by the Wayne County Prosecutor’s Office with two counts of criminal sexual conduct in the first degree with an 18-year-old victim who is mentally disabled. The morning of Sept. 18, officials at Oakland International Academy’s high school in Hamtramck contacted Hamtramck Police about the alleged incidents, said prosecutors.

After the hearing, Farinha strongly disputed the allegations, telling the Free Press that Aljahim did not commit sexual misconduct and in fact was trying to help the alleged male victim, who Farinha said was previously abused by other students. According to Farinha, some students had exposed the alleged victim’s private areas and took photos that they later circulated.

Farinha said that Aljahim then reported those incidents to the school principal, Larry Cowger.

Aljahim then also reported stories that he himself was involved in a sexual act with the victim, Farinha said.

“Ibrahim did his job in protecting the children,” Farinha said after the hearing.

The courtroom was filled Thursday with family and supporters of both Aljahim and the student alleging the crimes.
…

During the hearing Thursday, the student testified that in a separate incident, another student had removed his pants, exposing him, and took a photograph of his privates.

Farinha argued that incident was what led to false allegations of his client having sex in the car. During the hearing, video was shown of Aljahim and the student in and outside the school during various moments the morning of the alleged incident.

Farinha said the video and testimony shows that there would not be enough time for a sexual act to have taken place in the car. The student testified that he was “coughing up hair” after the alleged assault.

The student also testified about how his Islamic religious faith and the Quran compel him to obey his elders.

Aljahim is the school’s community liaison and got the job because he was seen as well-connected in the Yemeni American community of Hamtramck, said school officials. A majority of the school’s population has Yemeni ancestry, the school’s dean of students, Ahmed Hariri, testified Thursday.

Wayne County prosecutors said in a statement that the victim was mentally disabled and that Aljahim was “in a position of authority over the victim.”

The preliminary exam will continue at 11 a.m. Thursday with the expected testimony of police officers. After the hearing, Krot will decide whether there is enough evidence to bound over the case for trial to Wayne County Circuit Court.

See it all at LiveLeak…

Have you had enough Michigan?

Our Great Lakes states, notably Michigan and Minnesota, are being overrun with Muslim immigrants who carry different values than most Americans.

I am not here to judge the merits or discredit Muslims TODAY, just to point out that they do not fit into our Christian society.

In Islam man-boy rape is common and WIDELY accepted.

Do we really need the invasion of Muslim rape culture in America?

How does this make America better?

Just something to think about as we move forward toward 2020.

Democrats are apologists for this type of behavior.

We have plenty of Catholic Priests and Scoutmasters to provide us with our man-boy rape quotas.

Why invite more of this perversion?

Diversity is no longer a strength when that diversity adds more immorality to a country that is already struggling to find its moral compass.