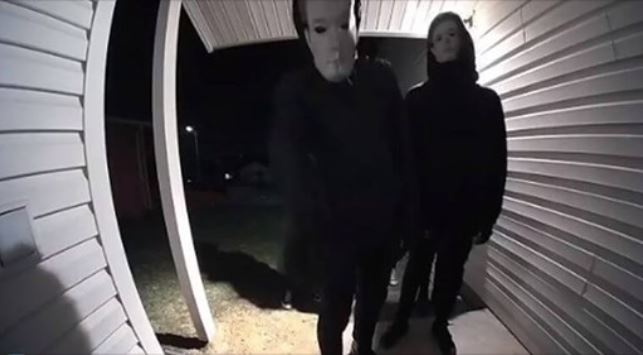 By Ryan Ledendecker at The Federalist Papers

Conservative journalist Andy Ngo — who was brutally assaulted over the summer by a gang of violent Antifa thugs while working in Portland — experienced another startling event by likely members of the so-called party of “peace” and “tolerance” after a group of thugs harassed him at home on Halloween night.

The gang of six individuals, who were all wearing printed masks of Ngo’s likeness while donning black hoodies and pants, can be seen in Ngo’s home security camera footage beating on the doors, knocking on his windows, gesturing to the camera while some seemingly recorded footage of the harassment incident with their phones.

“These 6 individuals wearing print-out masks of my face approached my family’s home last night, repeatedly rang doorbell, pounded on window, recorded footage of property & gestured at cameras. There were no candy bags. This follows their doxing of my elderly mom’s small business.”

These 6 individuals wearing print-out masks of my face approached my family's home last night, repeatedly rang doorbell, pounded on window, recorded footage of property & gestured at cameras. There were no candy bags. This follows their doxing of my elderly mom's small business. pic.twitter.com/dH8qn1YS85

The video shows the clear intent of the violent, angry wing of the left and what they’ll do to anyone with whom they don’t agree. While there was reportedly no violence in this particular occasion, God only knows what might have happened if Ngo decided to confront them.

If we’re being completely honest, the scene looked as though it could have been cut straight from the movie, “The Purge” in what looked to be an attempt by violent leftists to “purge” law-abiding, peaceful conservatives from their homes.

Last year in Portland, while working his usual beat covering Antifa protests, Ngo was violently attacked by a gang of masked, cowardly Antifa thugs with various items. Ngo was seriously injured in the attack and reportedly suffered a brain hemorrhage.

“I was beaten on the head & robbed on 29 June. Antifa then continued to hurl ‘milkshakes’ at my bleeding face. I was hospitalized with a brain hemorrhage,” Ngo tweeted shortly after the Portland attack.

I was beaten on the head & robbed on 29 June. Antifa then continued to hurl "milkshakes" at my bleeding face. I was hospitalized with a brain hemorrhage. There still hasn't been a single arrest by @PortlandPolice. Help me seek justice; join my legal fund: https://t.co/QtCt7A6zJp pic.twitter.com/sis8pFo3lf

The Post Millennial, where Ngo currently works as an editor at large, reported that the gang of individuals from Halloween night were associated with Antifa. Ngo released a statement to the outlet, indicating as such.

“This is the latest addition to a long list of antifa-related individuals doxing, threatening, and promising to hurt or kill me or my family,” Ngo wrote.

While it’s not clear who the individuals were, their harassment style certainly matches that of angry, Antifa thugs with nothing better to do on a given weeknight. Police were reportedly called and a report was filed after the incident but because Antifa goons are too cowardly to reveal their identities and choose to wear masks to hide their faces and gloves to mask fingerprints, as of this writing, none of the individuals have been located.

Also, don’t hold your breath waiting to see a report of the incident on a majority of the mainstream media outlets, as they’ve proven time and time again that they have zero intention of portraying Antifa gangsters for what they truly are — domestic terrorists.

Ryan Ledendecker is a freelance journalist and writer who covers U.S. politics and breaking news. He began his career in 2014, covering the unrest in Ferguson, MO. Prior to that, he worked as a web editor and columnist for an award-winning local newspaper.