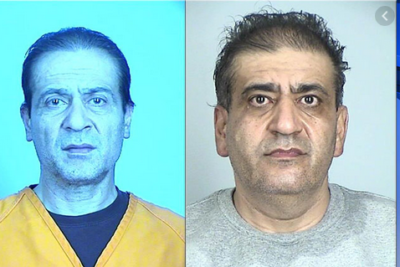 Feds say are “dangerous” and should remain in custody while they await trial. Usama and Issam Hamade said they would be proud to be placed on the U.S. terror list.

MINNEAPOLIS (AP) — Federal prosecutors say two brothers charged with conspiring to export drone parts and technology from the U.S. to Iranian-backed Hezbollah militia in Lebanon are “dangerous” and should remain in custody while they await trial, according to a court document filed Monday.

Usama and Issam Hamade are charged with conspiracy to violate U.S. export laws. Usama Hamade is also charged with smuggling. Prosecutors say that from 2009 to 2013, the Lebanese brothers repeatedly acquired sophisticated technology for drones then illegally exported them to Hezbollah, which the U.S. considers a terrorist organization.

The Hamades were arrested in February 2018 in South Africa and were recently extradited to the U.S. They will appear in a federal court in Minnesota on Tuesday for a hearing to determine whether they will be released pending trial. A third defendant, Samir Ahmed Berro, remains at large.

An attorney for Issam Hamade said in a court filing that his client was a member of the Lebanese Armed Forces, not Hezbollah. An attorney for Usama Hamade made no comment ahead of Tuesday’s hearing.

PROSECUTORS WROTE THAT HEZBOLLAH HAS USED DRONES FOR MANY YEARS AND THAT THE BROTHERS “PRESENT A DANGER TO THE UNITED STATES, AND TO OTHER COMMUNITIES AROUND THE WORLD.”

Prosecutors painted Usama Hamade as a “violent, drunken, gun-toting thug” who threatened to kill a government witness and his family by cutting him “to pieces” and once bragged that he cut off his gardener’s arms and bashed his gardener’s skull after an apparent theft.

The witness told authorities that he had regular contact with Usama Hamade from 2009 to 2011, and that he and his wife went to Lebanon with Usama Hamade in 2010. When they arrived in Beirut, the witness said, a group of armed men in darkened limos separated him from his wife and drove them with lights and sirens to a flat that Usama called his Beirut home.

The witness said Usama told him the Hamade brothers were both members of Hezbollah, and both brothers had pictures of Hezbollah leader Hassan Nasrallah in their homes. Usama Hamade also had firearms around the flat and fired shots into the sky. Usama Hamade also filmed the inside of his apartment and posted the video to Facebook. A Hezbollah flag is visible, as well as an assault rifle propped against the nightstand, prosecutors said.

Prosecutors said that as he was fighting extradition to the U.S., Usama Hamade said Nasrallah is a spiritual leader and there is nothing nefarious about the photograph. Hamade also said Hezbollah is a political party, not a terrorist organization.

Prosecutors called that “preposterous,” saying one of the drone parts acquired is only useful in military applications. They say Skype calls between Usama Hamade and an undercover agent show Hamade said he would be proud to be placed on the U.S. terror list.

Issam Hamade’s attorney, Bruce Nestor, wrote in his court filings that a Shiite Muslim would have to show public allegiance to Hezbollah or another group to avoid physical harm or retribution.

But prosecutors said Issam Hamade posted pictures of the 9/11 attacks on Facebook and suggested the attacks wouldn’t have happened if the World Trade Center had been built in reverence to Allah.

Prosecutors plan to show the Facebook posts, Skype calls and other evidence at Tuesday’s hearing.