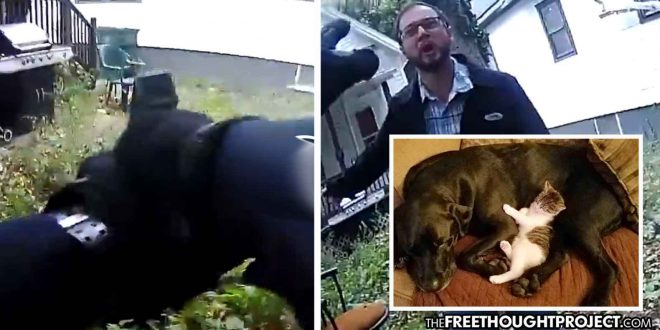 As TFTP has consistently reported, in their relentless and often violent pursuit to control what citizens can and cannot put in their bodies, the police state leaves behind a trail of blood and suffering. Many times over, this trail often contains the blood of defenseless animals like the Dempsey family’s beloved black lab named Tesla.

Last October, nearly a dozen cops swarmed the home of Charles Dempsey to allegedly “disrupt the suspected sale of illegal drugs by people who had congregated there.” However, Dempsey sold no such drugs from his home and was entirely innocent. This did not matter to the officers though.

As the video shows, the officer hops the fence and moments later Tesla rounds the corner barking at the intruder in her yard. Without hesitation and without simply jumping back over the fence, officer Algarin pulled his gun and fired two rounds into Tesla, killing her, but not before she yelped in agony from the pain of the bullets lodged in her body.

Seconds later, heartbroken Charles is seen staggering into the garden, sobbing as he pleads with the armed intruder who just trespassed onto his private property and killed his dog.

For a brief moment, it appeared as if Algarin was about to kill Charles as well.

“Get out of my yard! Why did you do that to her? What is wrong with you? She would’ve been fine,” the distraught father screams at the cop.

As Charles cries out in sadness after watching a cop murder his dog, the callous cop then asks the other officers if they are “good,” as if he hadn’t just murdered a family’s dog.

Around the corner, Charles’ 10-year-old daughter watched the incident unfold as well, leaving her severely traumatized.

The family’s lawyer, Elliot Shields told the Democrat & Chronicle: “My client and his daughter are traumatized. They saw this happen.”

“There are other ways to handle a situation where a dog is running at an officer. Why is the first option to shoot the dog?” he said. Our frequent readers likely know the answer to this question.

For nearly a year, police fought to keep the video of this puppycide secret and refused to release it. But after a long battle, the family finally won and saw it released.

According to the Sun:

The video, as well as video from nine other officers who were present at the scene, was released earlier this year by judicial order after Dempsey and Shields filed an open-records lawsuit to get them.

Shields, who won a preliminary victory in another suit against the city for release of police video, said he believes Tesla’s case may mark the first occasion on which the city surrendered unredacted police footage in response to a Freedom of Information request.

Highlighting the utter uselessness of the cops swarming the Dempsey’s house and murdering his dog, according to the attorney, the people police were looking for were in the yard behind Dempsy’s yard.

Neither of the two men detained after police killed the family’s dog had any illicit substances on them, according to Shields. Below is this heartbreaking video, warning it is graphic.

Sadly, cops killing dogs — including those belonging to entirely innocent people — is a common occurrence.

According to an unofficial count done by an independent research group, Ozymandias Media, a dog is shot by law enforcement every 98 minutes.

This disturbing trend led to WGRZ-TV in Buffalo, filing a Freedom of Information Act request for use of force incidents within the Buffalo police department which is right down the road from Rochester. What they found was shocking.

According to use of force reports requested by WGRZ-TV under the Freedom of Information Law, Buffalo Police shot 92 dogs from Jan. 1, 2011 through Sept. 2014. Seventy-three of those dogs died. Nineteen survived. This is just one department.

Amazingly enough, pizza delivery drivers and postal workers don’t seem to have much of a problem interacting with dogs, and they are in the same situation that police are in, going to a stranger’s house with no clue what to expect. In fact, these delivery workers actually knock on more strange doors and encounter more dogs in just a week than many police officers do in their entire careers.

UPS workers accidentally made this point quite clear with a Facebook page last August showing delivery drivers having fun with dogs. In the meantime, cops continue to kill and are almost never held accountable.

Something has to be done and it is far more than just training. The most effective action that would need to be taken would be to drastically reduce the instance of no-knock search warrants. According to an ACLU report, 62 percent of SWAT raids are searches for drugs.

If we want to end puppycide, we have to end the drug war, the two are not mutually exclusive.