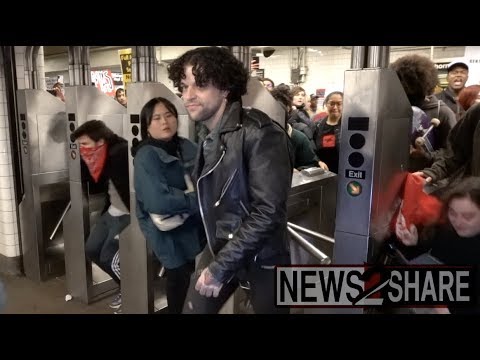 A protest that was supposed to be about the announced addition of more officers on NYC subways, turned out to be more.

Several protesters were also calling for free subway fares and not just protesting the added policing of NYC’s subway system.

Look, it’s really simple. Black and brown people shouldn’t have to pay for fare on public transportation. Don’t you get it, bigot? [Chaos in Brooklyn as 1,000 anti-cop protesters storm subway stations yelling ‘don’t let these pigs touch us’ after a spate of violent arrests and the city’s vow to add even MORE officers to crackdown on anyone not paying the $2.75 fare, Daily Mail, November 2, 2019]:

Nearly a thousand protesters took to the streets of Brooklyn to demonstrate against the NYPD after a spate of violent arrests on the subway and over its plans to put more officers on the beat to catch anyone who skips paying the fare.

The protesters started gathering in Downtown Brooklyn near Barclays Center at about 7pm Friday, with their signs reflecting the dual nature of the march.

While flashier banners bore slogans such as ‘Don’t let these pigs touch us,’ ‘F**k the police,’ ‘Punch that cop’ and ‘NYPD out of MTA,’ other signs read ‘Free transit,’ ‘Poverty is not a crime’ and ‘Our subways need more $ for elevators, not for cops.’

Their grievances stem from two issues. One, alleged police brutality against New Yorkers including a group of teenagers who officers were seen fighting with in a recent viral video.

The other issue is that police have vowed to create 500 additional jobs specifically for officers to monitor the subway network and arrest anyone who jumps the barriers rather than pay the $2.75 fee.

One, which circulated last week, showed them pounding on the windows of a subway car, waiting for the doors to open, before rushing on board, tackling the man to the ground. It is unclear why he is wanted. He had his hands in the air for several minutes before they arrested him and bystanders say the officers drew their guns.

Read the rest at UNZ…

Why didn’t De Blasio think of that?

Here are two videos of the riots that demanded less cops and free fares.

What a bunch of thugs!

There are bad cops in this world but I’d actually like to see these people take free rides on the subway with no cops at all to protect them.

I suspect they’d be changing their tunes rather quickly.