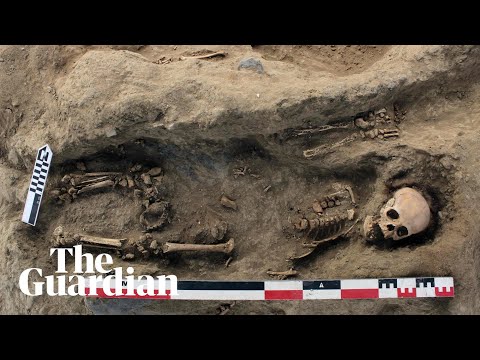 Were the white settlers the only criminals in the Americas?

So many think that is the case.

The Guardian has posted a video that may make many rethink that.

Here is that video:

Human history is full of such evil.

Reporting for PJ Media, Tyler O’Neil explores the thought of this this destoying the Native American innocence “myth.”

Every Columbus Day, liberals insist that the story of European colonization is a simple narrative of good versus evil: horrible Europeans came upon innocent Native Americans, introducing slavery, exploitation, and oppression. A massive archaeological discovery blows one of many gaping holes in this narrative. While Europeans did indeed do horrible things, the natives weren’t exactly innocent.

Two hundred and fifty skeletons of children between the ages of 4 and 14 have been unearthed at Huanchaco, Peru, in what experts say is likely the world’s largest child-sacrifice site. Huanchaco is a site of the Chimú culture (1200-1400), a predecessor to the mighty Inca Empire, which also carried out child sacrifices.

‘This is the biggest site where the remains of sacrificed children have been found,” the excavation’s chief archaeologist, Feren Castillo, told AFP in August. “There isn’t another like it anywhere else in the world.”

The Peruvian press agency Andina reported that archaeologists discovered the skeletal remains of 250 children and 40 warriors at the site, which is 346 miles north of Peru’s capital of Lima.

This is horrible news for the Native American innocence myth. The very worst site for a particularly horrific form of human sacrifice — the ritual killing of children! — long predates Christopher Columbus’s first steps in the New World.

Horrifying as this discovery is, it should not surprise anyone. Human sacrifice is tragically common throughout history, just like slavery. People in the Ancient Near East, Europe, China, Tibet, India, the Pacific, and West Africa practiced it — and it was horrifically common in the pre-Columbian Americas.

In Meso-America, the Mixtec sacrificed rulers who lost a ballgame, while the Maya sacrificed humans to close sinkholes — with many of those sacrificed being under 20 years old. The Aztecs infamously sacrificed roughly 80,400 prisoners (mostly defeated warriors) by ripping out their hearts. They also sacrificed children to appease their rain god, who required children’s tears.

In fact, the Day of the Dead festivities (before, during, and after Halloween) popular in modern Mexico extend back to Chapultepec Park, the resort of Montezuma and other Aztec rulers. The modern display of skulls is reminiscent of Aztec skull racks, huge wooden frames holding the impaled heads of enemies or sacrificial victims, the Chicago Tribune reported.

Many native tribes in the area that would become the United States also practiced human sacrifice. The Pawnee practiced an annual Morning Star Ceremony, which included the sacrifice of a young girl — until the 1800s.

Read it all at PJ Media…

Did that stuff only happen in SOUTH America?

But I’d be a bit skeptical of that.

I have no reason to believe that Native American “Indians” have such a dark history.

Well I do have one reason actually.

Most of the world does.

From America’s slavery to Hitler’s holocaust and everything in between, this is a world which has evolved from much of the evil that established it.

Still, until we find such burial grounds in Kansas, we owe respect to the true founders of America.

Centuries later many of them are proud to be Americans just like most of us.

It’s a matter of perspective.

You play the hand you are dealt.

We can’t change history, we can only attempt to learn it and not repeat the worst of it.