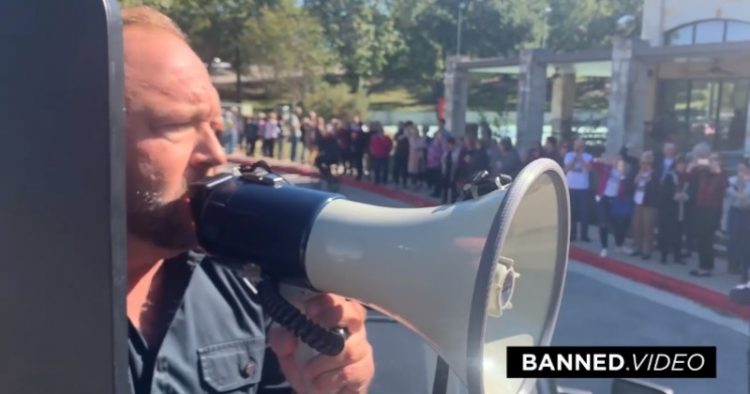 An Austin, Texas pro-Hillary Clinton rally was crashed by Infowars founder Alex Jones.  Love him or hate him, Alex knows how to make his presence known with his iconic bullhorn, but he added a little something extra, an armored vehicle that he bullhorned the crowd with “Epstein didn’t kill himself!” from the opening in the top.

,” Jones trolled the area in the armored vehicle blasting the crowd with his rhetoric.

“Hillary Clinton’s political career is dead. President Trump is president, America is coming back from the dead,” said Jones through a bullhorn.

Here’s more as Jones thundered, “Your God Hillary Clinton is a war criminal and is involved in child sex trafficking.”

Hillary Clinton protestors are crowded near the front of Riverbend Church where Clinton will be talking about her new book with her daughter, Chelsea, @ 3 PM @KVUE pic.twitter.com/2vet6MZ7z4

Of course, instead of siding with the law, some Clinton supporters bashed Jones by yelling, “Lock him up!”

For what?  Speaking the truth?

Already, because of President Donald Trump failing to keep his promise to the American people to deal with the Clinton crime family, she is being touted as possibly jumping back into the presidential elections, and polls show that Democrats would put her as a front runner.

From my perspective, Alex Jones has changed quite a bit over the past 4 or 5 years from some of the views he used to hold.

While I don’t agree with many of his changes nor what appears to be a blind following of President Trump, one can’t deny that he knows how to crash a party, and this is classic Jones.

As for the church, well, what can I say?  I don’t really know Riverbend Church, but I can probably guess they support the very things that God abhors and are teaching their people to be at war with God and fully anti-American if they are inviting the likes of Hillary and Chelsea Clinton.