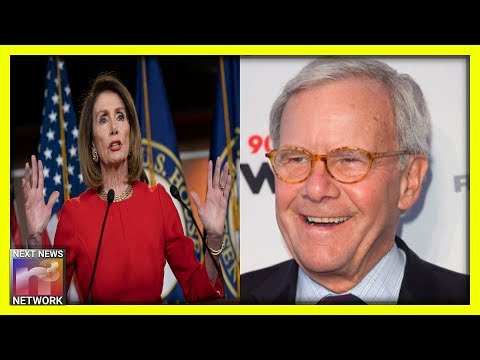 Tom Brokaw has some sobering words for Trump impeachment supporters.

Democrats simply “Don’t Have the Goods” on President Trump.

That was his message in a recent interview with Andrea Mitchell.

A voice of reason in a sea of Schiff.

Tom Brokaw was on with Andrea Mitchell when he broke it to the Democrats that they don’t “have the goods” on President Trump. YA THINK?

He was speaking about his time as a reporter during the Watergate era and how Nixon was actually involved in a crime but Trump has done nothing wrong in the current effort to impeach him.

“They don’t have the same kind of clarity that the people who were opposed to Richard Nixon had because it was so clear that these were criminal acts he was involved in.”

.@tombrokaw: Unlike with Nixon, Dems “don’t have the goods” on Trump.

“They don’t have the same kind of clarity that the people who were opposed to Richard Nixon had because it was so clear that these were criminal acts he was involved in." pic.twitter.com/phTXYjCMzq

Pelosi is making a huge mistake in doing this but she has no choice. The Democrats have no good candidate for 2020 so the focus must be on trying to damage President Trump in any way they can.

Also, the focus is off of the impending Horowitz report and on Barr’s effort to investigate our corrupt intel under the Obama administration.

Not to mention loads of corruption being uncovered about Joe and Hunter Biden!

Brokaw must be killed!

They would fire him if he were still on the nightly network news.

Nice to have you back for this Mr. Brokaw.

Americans need to be made aware that this is more of a circus than a legitimate impeachment.

This is obviously an attempt to cover their own guilt and get rid of Trump before he gets rid of them.

Anyone with half a brain could see that.

Unfortunately many liberals seem to fall well below that minimal threshold.