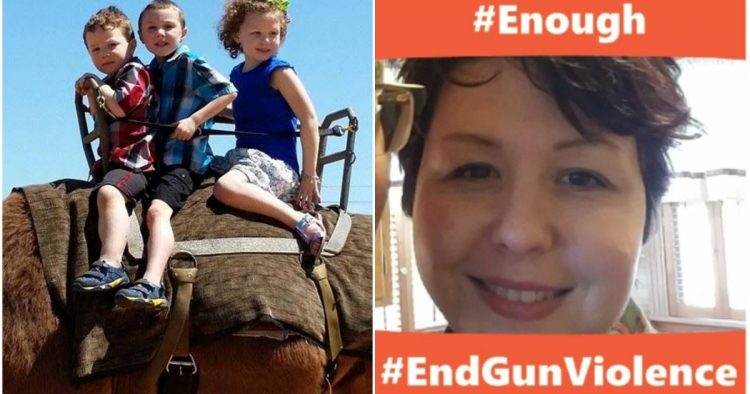 And this is the reality we face in America:  Those advocating for gun confiscation are pointing their fingers at law-abiding citizens for the very crimes they contemplate and commit every day of their existence.  The long line of mass shooters has been anti-American minded, often influenced by psychotropic drugs.  The latest mass shooting, which is a shooting that involves at least 4 murdered (in this case, the last person killed was self-murder), involved a gun confiscation activist mother who murdered her three children by shooting them to death and then turned the gun on herself.

Ashley Auzenne, 39, was found dead, along with the bodies of her three children, Parrish, 11, Eleanor, 9, and Lincoln, 7, after a family member became concerned and requested police check on the family.

“There is a gun inside the house was used in this incident,” said Lt. Chris Brown, of the Deer Park Police Department. “A handgun.”

According to ABC 13 the family was discovered by police on Tuesday morning.

On Thursday, the Harris County Medical Examiner’s Office ruled their deaths as a murder/suicide, with their 39-year-old mother, Ashley Auzenne, as the suspect.

“The family has all rallied around my son, Murvin,” said the elder Auzenne. “Our focus is only on one thing: helping through this difficult time.”Meanwhile, parents were worried about the well-being of their children at Deer Park Elementary School Wednesday, where two of the Auzenne kids attended school.

“It really makes me mad, to be honest,” said Deer Park Elementary parent Chris Pierce, who described the children as smart and loving. “It’s just amazing how it affects everybody whether they go to school with them or not.”

“They were kids you wanted to have around, they really were,” said Murvin Auzenne Sr. “They played well, they talked to the adults. They’re amazing children in all kinds of fantastic ways.”

“The family has all rallied around my son, Murvin,” Auzenne said of his son. “Our focus is only on one thing: helping through this difficult time.”

According to The Washington Examiner, the mother was a known gun confiscation activist, and battled depression and anxiety, which probably means, though it has yet to be substantiated, that she was probably also taking some form of medication.

Ashley Auzenne, 39, was known to have been battling depression and anxiety in addition to physical ailments such as arthritis and lupus at the time of her death, which was ruled as a suicide by a self-inflicted gunshot wound.

Ashley Auzenne was a vocal advocate for stricter gun control in the United States, with multiple social media postings calling for an end to gun violence and Facebook profile pictures that bore the hashtags #Enough and #EndGunViolence.

Now, stop and think for just a moment:  Over 100 million law-abiding gun owners in America own over 300 million gun owners.  We are not a problem.

The problem in our society is people who have abandoned God and our foundations and are seeking to disarm law-abiding citizens.

It turns out that the real threat when it comes to gun violence are those crying the loudest for disarmament.  Ashley Auzenne is just the latest example.  Sadly, her children paid the price for their mother’s lawlessness.