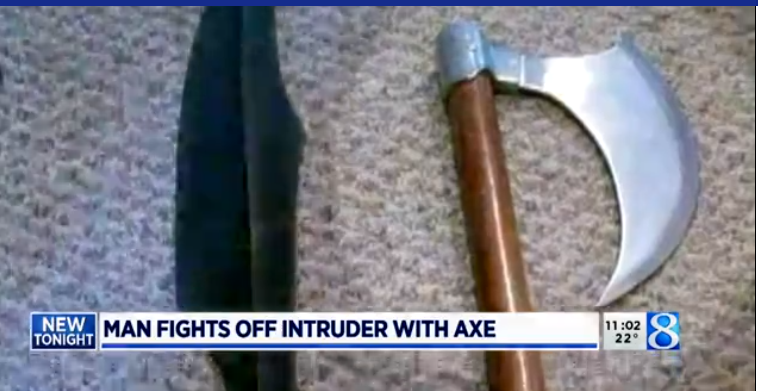 Oshtemo Township — A Michigan home invader broke into the apartment where he thought an ex-girlfriend was living. The suspect probably wasn’t expecting that the owner was a participant in ritualized battle games with sharp medieval weapons. He finally gave up, ran, and was arrested. After leaving a trail of blood, of course.

Ben Ball, 36, was home watching TV and playing video games at around 11:30 p.m. Wednesday night, when Alex Rawls, 33, pounded on his door several times, then suddenly kicked it in. Ball stated that Rawls used to date his former roommate, but she moved in order to distance herself from him. Rawls is a convicted felon.

Ball practices with medieval weaponry (and works at Applebees the rest of the time). His apartment is filled with replica weapons from as far back as the Vikings. He had self-defense within an arm’s reach when Rawls burst into his apartment. What he chose to use? A replica battle ax – a sharp one. 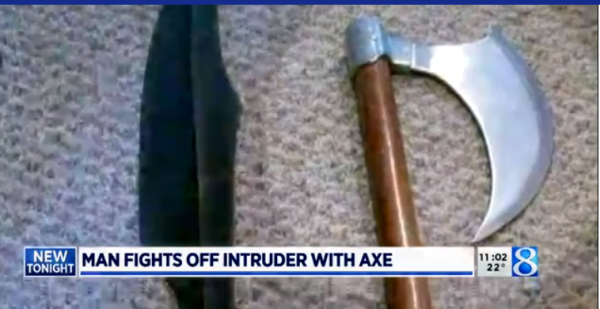 Ball was unsure if Michigan home invader Rawls had a firearm, but assumed he did.

“I’ve got a double-headed carbon steel battle ax that was homemade by a gentleman who has since passed. That’s what I call my baby… (The) door opened, (I) grabbed the ax, (then) step, step, hit… There was a bloody mess everywhere.” Ben Ball (Wood tv)

Ben tagged Rawls once in the torso with the sharp blade as they fought through the apartment, trashing the place and leaving a trail of blood. A police K9 unit later used that blood to track Rawls.

Alex Lavell Rawls has a lengthy criminal record, from assaulting and disarming a police officer to fleeing and eluding officers (Michigan Department of Corrections). Rawls faces up to 20 years in prison for 1st Degree Home Invasion.

Though attacking a home invader with anything can always be hazardous, people have a right to defend themselves, their property, and families. A gun would probably have been more efficient. But at least this home invader has a nice mark from the sharp blade to remind him of his stupidity.