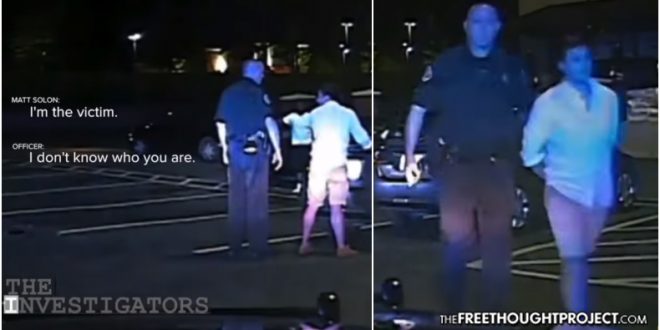 Kennesaw, GA — An Army veteran is now suing three Kennesaw police officers he says lied on their police reports in order to charge him with a misdemeanor and a felony after the former soldier disarmed and neutralized a man who was threatening him and several others with a gun. Matthew Solon was arrested along with his attacker on June 26, 2017.

He’s now suing the officers he claims fabricated evidence against him in order to execute a retaliatory arrest.

Solon says he and some friends were enjoying a night on the town at Mazzy’s sports bar in Kennesaw. In the parking lot of the bar, a man by the name of Dwight Cooper came up to him, brandished a firearm, and threatened to use it against the group. The quick thinking veteran says he relied on his military training to subdue Cooper (by pummeling him), disarming him, and calling police. He even unloaded the firearm and rendered it useless and then provided medical attention to his attacker. Everything he did was heroic, lawful, and outright impressive.

When police arrived, to Solon’s surprise, they arrested him as well, saying he disobeyed orders by police and struck Cooper in the head with the firearm, pistol whipping him, “so he would stay down“ (reportedly a quote from Officer Joshua Hale‘s official police report). Solon told reporters following the incident:

I thought I did everything right…I unloaded the weapon, I eliminated the threat, called the police, gave him medical attention, everything, and when the police arrive they acted like I’m the criminal here.

Following the attack, only Solon was arrested that night. Later, both men were charged with the exact same crimes: misdemeanor battery and a felony for possession of a firearm during commission of a crime. To Solon, the whole incident was hard to believe and impossible to accept.

Here’s the transcript of the 911 call:

Solon: “Hey, someone just pulled a gun on me.”

Solon: I have the gun. It’s disarmed. It has hollow points in it. It’s a Glock.

Solon: This guy asked for a cigarette. We told him we didn’t have a cigarette. He’s drunk, and he pulled a gun out on us. So, I disarmed him.

Solon: The cops are coming. Yeah, the ambulance needs to hurry up. He’s bleeding from the head pretty hard.

Kennesaw officers arrived and began their investigation. At some point they determined Solon to be uncooperative, apparently forgetting or not being made aware of the fact he called police to alert them to their belief they were in immediate danger of being shot. WBIR then transcribed a portion of the conversation between the officers which indicated they believed him to be uncooperative, not telling the truth, or otherwise.

“He’s just back there because he’s being uncooperative,” (says one officer to another).

The officers then question Solon’s narrative and characterized him as braggadocios one might say, openly questioning if the police were doing their jobs correctly or not.

Solon then attempted to remind the police officers it was he who called them for help after surviving what was perceived as an armed assault.

“You know, you guys wouldn’t even be out here if I didn’t call you.”

“Better off handling this myself.”

“I mean I only saved their lives and stuff, no big deal.”

The former Army soldier lamented calling the police and attempted to characterize himself as the victim, a position he steadfastly maintained throughout the entire police contact.

Get a f***king gun pulled on me. You know, just saved three people’s lives. Disarmed the guy. Keep him there because they wanted to f***king run, and then I get thrown in the back of a f***king cop car.

Officer Hale removed Solon from the car, removed his handcuffs, and asked him to tell him once again what happened. Solon told Hale:

I had it under control, I feel like…The whole situation…I had him on the ground. Had him taken care of, I called the ambulance. I had it disarmed. I mean, what else did you guys do, except put me in the back of the car in handcuffs.

Hale decried Solon’s belief the police were not doing their jobs by claiming he had no knowledge of the events which occurred and said he only heard it was a domestic dispute involving a gun. He told Solon:

We come to a scene. There’s a gun on scene. All I’m told is you’re the last one to have the gun…I know that we have a person injured. I know we have a gun on the ground, and I know you’re the last one to talk it [sic], and you start having an attitude with me…You start touching your pockets, and everything. I asked you not to, and you’re like, ‘Hey, I’m the hero’ or whatever you were saying.

Solon apologized for his perceived attitude and Officer Hale then reviews security footage of the incident which shows the thwarted attack. Apparently not convinced Hale and each of his friends were telling the truth, the Kennesaw officer then put Solon in handcuffs again, put him into the back of the police car, arrested him and charged him with the crimes of battery and possession of a firearm in the commission of a crime.

After reviewing the video, Hale approaches Solon again, and again, places handcuffs on him and puts him in the backseat of O’Brien’s cruiser, all the while Solon kept asking, “Did I do something wrong?”

Luckily, all charges against Solon were dropped. He was cleared of all wrongdoing, and now he’s suing for false arrest and what he perceived as retaliation for getting mouthy with the cops. Solon’s first mistake was calling 911. His second mistake was not invoking his 5th amendment rights. And his third mistake was trusting the system with the truth. When the system is driven by policing for profit and empowered by lawyers who, in turn, profit from bogus charges, the system is completely broken.

Yes, America, in the land of the free, a decorated war veteran can defend himself against a handgun armed attacker, and end up going to jail for it. Self-defense, apparently, is a God-given right which we are no longer entitled to exercise. According to Hale, Solon should’ve simply “called police” and let them handle Cooper. Maybe he would’ve lived, maybe not.