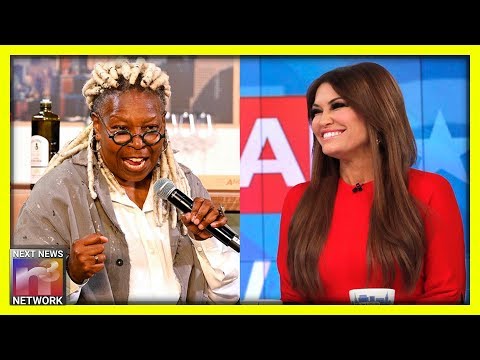 Kimberly Guilfoyle just exposed Whoopi Goldberg as the Trump hater that she is.

But when Kimberly Guilfoyle came armed with facts, Whoopi Goldberg ended up being exposed.

Here’s more from Josh Bernstein at Next News Network:

Ryan Saavedra of The Daily Wire has the story:

“You look at the fact that even on this show the first day after the election you said, ‘and now let’s start with impeachment,’” Guilfoyle said. “This has been something that has been a concerted effort by a lot of people who are disappointed by the results of the election to undo it and remove a duly elected president of the United States.”

“It was on this show on November 9th,” Guilfoyle added.

Yet, a clip found by RNC Rapid Response Director Steve Guest showed that the comments were made on the show the day after the election and Goldberg was the one who said it.

“We can kick his a** out,” Goldberg said on November 9. “There is such a thing called impeachment.”

Read the rest at The Daily Wire…

Goldberg and her co-conspirators at The View aren’t fooling anyone.

The show has devolved into a daily propaganda machine for the radical left.

I don’t watch The View, except when they hit the news cycles with videos like this, but Joy Behar and Whoopi Goldberg are legit Trump haters.

They fool none of us.

Even Meghan McCain is a Trump hater that happens to lean right on certain issues.

Let's go to the tape!

On The View on November 9, 2016, Whoopi Goldberg said, "We can kick his ass out. You know, there is such a thing called impeachment you know." pic.twitter.com/aNpIP0XKdf

I’m sure tens of thousands of fans are now considering a boycott of the show. 😉

We all know better than that, but all you can do is put the truth out there and hope people eventually start to accept it.