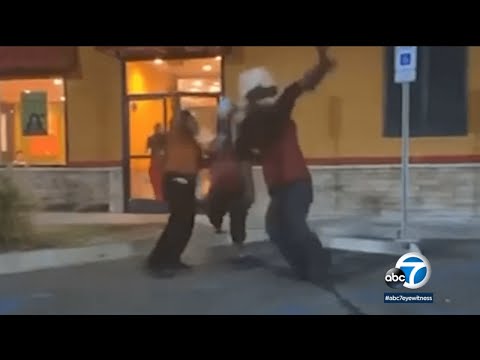 Racial tensions in this country are worsening again thanks to the media’s message of hate and their continued portrayal of President Trump as a racist.

Here are two of the latest examples.

Many of us who have worked in retail might remember being taught that “the customer is always right.”

What if the customer is trying to get justice for her order and shouts a racial slur?

Does that give a young man, who is an employee at the local Popeye’s, a legitimate excuse to body slam an older lady on the pavement outside the restaurant?

You have to respect your elders which is a lesson many young people, of all races, are not learning today.

By the same token, this woman allegedly used the word “nigger” inside the restaurant.

You can’t use that word without expecting repercussions in 2020.

Still that is no reason to body slam her in the parking lot even if she said it.

COLUMBIA, Tenn. (KABC) — Another incident of violence erupted at a Popeyes with an employee allegedly body slamming a woman onto the concrete outside a Tennessee restaurant.

Video of the alleged incident has gone viral and is now the subject of a police investigation.

Witnesses say the attack began after a woman disputed a charge on her bill at the restaurant in Columbia, Tennessee.

A heated argument ensued between the customer and several employees, prompting workers to tell the customer to leave the restaurant. Employees claim the woman then used the N-word.

“This ain’t no place to say the N-word,” a customer who was speaking off camera said in the video.

Footage shows the woman walking out of the restaurant, followed closely behind by several employees, including a man who appears to lift the woman off the ground and quickly slam her on the pavement.

“If she said something that she regrets, it doesn’t give a grown man the right to chase her into the parking lot as she is trying to leave the store, and body slam a 55-year-old grandmother down on the concrete,” he said.

Another racially charged story comes to us from Texas where a black substitute teacher beat the daylights out of a white high school student.

KYLE, Texas — A substitute teacher at Lehman High School in Kyle has been fired and charged after videos posted on social media appeared to show her fighting with a student.

KVUE spoke with the school district and a student in the classroom, who confirmed that the video circulating on social media captured the incident. In the video, you can see the teacher punching the student multiple times, pulling her from her desk and stomping on her head. Another video also shows the student striking the teacher as she was grasping her in her seat.

The sheriff’s office said Lankford was arrested on-site after school resource officers responded. She was charged with aggravated assault, a second-degree felony.

A 10th grader who was in the class and didn’t want to be identified told KVUE Lankford was passing out papers and students were laughing. The student said Lankford became increasingly aggravated, before getting into a verbal altercation with the victim.

“The student said ‘shut up’ back. She said, ‘No, you shut up,’ and the teacher got in the student’s face and put her hand on her chest and her other hand on her arm,” the 10th grader said. “The student swung, because she was in her face and pressing her. The teacher put down her glasses – she swung like three times, pulled her to the ground and stomped on her head.”

Read the rest at KVUE…

What is going on with the high intensity racism in America?

The left blames Trump, who is not at all racist in my mind.

Everyone has an opinion, but Trump is facing a media that is stacked against him and people simply believe the hate the leftists are spewing.

Until people start listening to each other and tuning out those who intend to make us hate each other, this will not only keep happening and likely worsen.