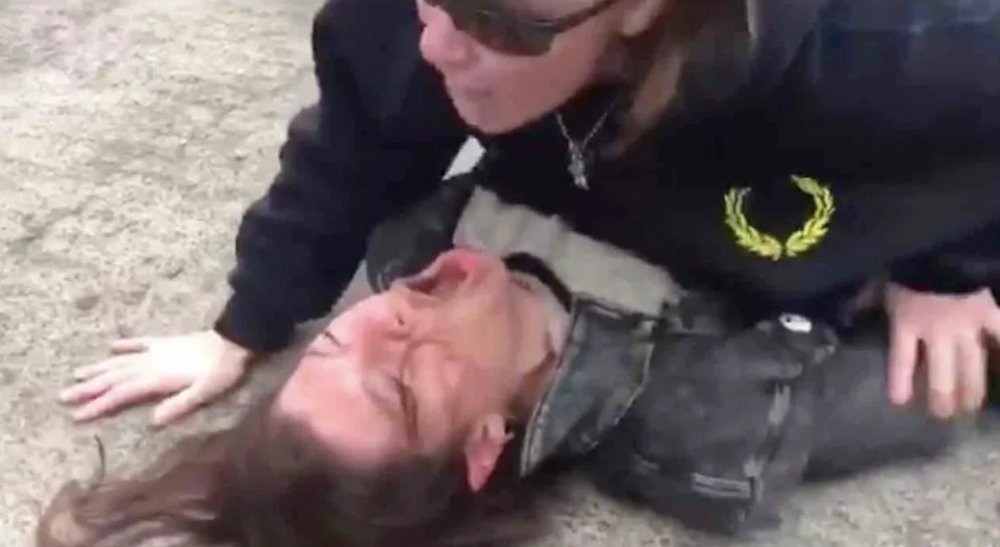 MMA fighter Tara LaRosa said she used her jiujitsu skills to take down a woman who allegedly started a fight during a Portland, Oregon, flag wave honoring veterans Sunday.

LaRosa livestreamed the flag wave on an overpass above Interstate 84 when the physical altercation started between the woman and a female from LaRosa’s group, the members of which were wearing “Make America Great Again” hats — the iconic symbol of President Donald Trump’s 2016 campaign — and insignias for the controversial Proud Boys.

Here’s a clip showing LaRosa on top of the woman, who pleaded with LaRosa to get off her and called herself a “professor.” (Content warning: Language):

At flag-waving rally in Portland, @TaraLaRosa says she had to take anti-Trump protester to the ground after the woman allegedly attacked another woman. The group detained the self-described professor until police came. LaRosa says the woman bit her chest, causing an open wound. pic.twitter.com/LrPJLsMIO6

Others with LaRosa told the woman on the ground that “you assaulted someone,” and “you’re going to jail.” The woman complained that she couldn’t breathe.

As LaRosa relented, she told the woman, “If you get up don’t attack anybody.”

“I just got done having brunch with my friends,” the woman is heard saying, after which she accused LaRosa’s group of “antagonizing the city I live in.”

“Stop f***ing trying to fight; we’re not here trying to fight,” LaRosa is heard saying after the woman moved away and sat with her back to overpass fence.

“You don’t know what Donald Trump is!” the woman yelled. “I don’t agree with Trump!”

LaRosa put her cellphone away amid her livestream when she took down the woman. After the incident, she pulled her cellphone out and showed her interaction with police.

A “violent woman got violent,” LaRosa said, explaining that “I pulled her off using jiujitsu techniques … I keep people safe; that’s what I do.”

LaRosa told police that her group was on the overpass, facing passing cars and waving flags, when the woman approached them from behind and noticed their insignias and repeatedly said “f*** Proud Boys.” The woman then attacked a female from the flag-waving group, LaRosa said, and that’s when the MMA fighter stepped in.

LaRosa added to cops that the woman punched her eight to 10 times and bit her breast through her clothing:

.@TaraLaRosa says she was injured when the woman bit through her hoodie, shirt and bra. She has scrapes on her neck and knees as well. pic.twitter.com/k1nJCpDCdi

Toward the end of our day, a woman came up & started berating us. She didn’t get a reaction from me so she moved on & attacked another women in our group. I had to break up a fight & put her down till the cops came. I had just started live streaming.https://t.co/hVwIgugoFh

Police told OregonLive there were no arrests but that the incident was referred to the district attorney for review. Police have not released the name of the woman LaRosa took down, KGW-TV reported.

While the Southern Poverty Law Center has designated Proud Boys a hate group, a high-ranking member of the FBI in Oregon said the agency does not deem Proud Boys an extremist group, the Hill reported.