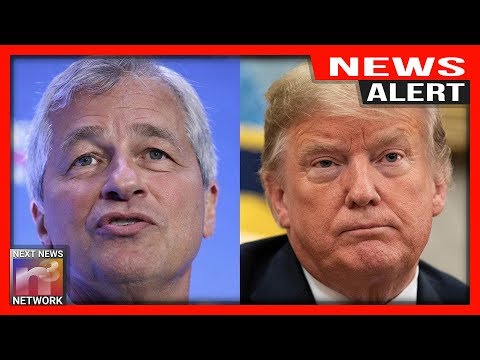 What does the CEO of one of the world’s largest banks think about Donald Trump’s chances in 2020?

With all of the anti-Trump info constantly circulating online, the answer may surprise you.

Does that surprise you that Dimon is firmly in Trump’s corner?

President Trump has one thing going for him that the Democrats don’t and is when push comes to shove, the wise business interests are never going to back a socialist in 2020.

While the corrupt media deliberately ignores the facts, there is no dispute that America’s economy is roaring after the wisdom of 63 million voters to put a successful businessman into the White House.

No matter the indicator, under Trump the U.S. economy has not only recovered from the malaise of the dismal presidency of Barack Obama but business is absolutely booming.

And this alone is a very serious dilemma for the cult of woke as well as the impeachment lynch mob because if they are able to inflict serious damage on the POTUS, they will also do so to the American economy.

In recent weeks, many business leaders have balked at the economic wrecking ball that will be swung by the likes of Elizabeth Warren and Bernie Sanders are speaking up in favor of the billionaire outsider who rode into town and saved America.

One of them is Chase CEO Jamie Dimon who went on CBS’s flagship “60 Minutes” on Sunday and delivered very bad news for Democrats despite Lesley Stahl’s gloom and doom spin.

“This is the most prosperous economy the world has ever seen.” The CEO of America's biggest bank, Jamie Dimon, says the U.S. consumer is "quite strong" https://t.co/fFUJgepYXG pic.twitter.com/LeLfgp56yN

Come on, why wouldn’t you back a socialist?

Of course the real capitalists are going to support Trump.

There is so much focus on Trump’s haters these days that Americans don’t seem to realize that big business is in Trump’s corner.

Forget those clowns with bad intentions that are trying to permanently hijack the internet.

The tech companies have an evil agenda and that agenda starts with Trump’s defeat.

The majority of American CEOs, that still care about profits, are firmly in the corner of Team Trump.

Why wouldn’t they be?