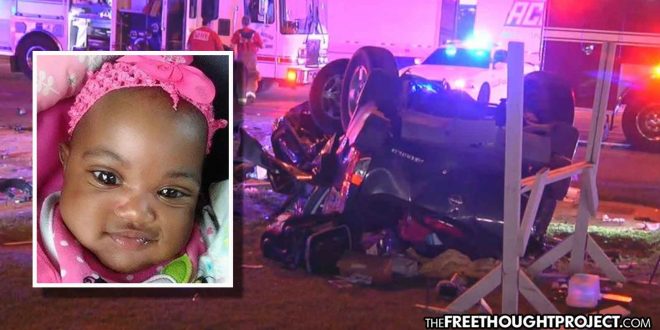 Baton Rouge, LA — A mother has been grieving the loss of her baby for nearly two years after an off-duty cop—recklessly driving 94 mph—smashed into her car, killing her daughter and injuring all the other occupants. Now, after this officer took the life of her child, prosecutors announced that officer Christopher Manuel won’t receive so much as a speeding ticket for driving nearly twice the posted speed limit and killing a baby.

This case has been tainted from the start. As TFTP reported last year, instead of arresting the cop, the officer’s brothers in blue arrested the mother. Brittany Stephens, 20, was arrested last February on charges of homicide—in spite of the fact that the officer caused the deadly crash. According to police, Stephens did not have the straps at the correct level in the car seat and the seat was improperly secured—something parents across the country are likely ‘guilty’ of—so she was deemed responsible for her daughter’s death.

Police said the “lack of securing the seat to the vehicle and the loose straps are a contributing factor in the death” of the child and “show gross negligence” on the mother’s part, according to the Advocate.

What’s more, Stephens was not the driver of the vehicle. However, she told police that she was the one who strapped in her daughter, so she was the one facing charges in her death.

Stephens—whose baby’s life was ended by a reckless cop—was booked into the Baton Rouge prison last year on one count of negligent homicide and a seat belt violation while the cop who killed her baby walked.

According to the report, three other adults were in the car and were all cited as well.

Officer Manuel was never brought to jail and never cited.

At the time, the case garnered national attention because the mother was arrested instead of the cop. Yes, she was at fault for improperly putting her child in the car seat. However, had Manuel not been driving nearly twice the posted speed limit, the child would have been fine.

What’s more, Manuel is still a cop and will likely go back to regular duty. As the Advocate reports:

Manuel remains an officer with the Baton Rouge Police Department. He was assigned desk duty after the crash and is still awaiting a resolution in the department’s internal affairs process, which couldn’t happen until after the decision from prosecutors.

East Baton Rouge District Attorney Hillar Moore III said Tuesday his office decided not to bring charges against either Manuel or Stephens, reasoning that both had contributed to the tragic outcome even though “one suffered a bigger loss.”

“It becomes a conundrum of ‘Who’s at fault?’” Moore said. “Do you really want to charge the mom with her child’s death? Of course not. Which act truly caused the death, speeding or lack of proper restraint? Is one more culpable than the other? We couldn’t really determine that based on the facts of the case and what the law requires.”

Marcus Allen, an attorney representing Stephens, decried the decision and said that at the very least, Manuel deserved a speeding ticket for driving 94 mph.

“How can you overlook the glaring fact that he was going almost 100 mph?” Allen said. “You just cannot operate a vehicle that fast. For him to walk away from this with no criminal charges … it almost appears he’s above the law.”

As the Advocate reported at the time, the crash occurred around 8 p.m. Oct. 12, 2017, when a Baton Rouge Police officer — driving his Corvette 94 mph while off duty — struck the Nissan carrying the four adults and four children. Officer Christopher Manuel was driving north on Airline Highway and crashed into the passenger side of the Nissan, which was turning left onto Florline Boulevard at a green light.

Manuel was likely driving nearly twice the speed limit because he knew he could simply flex his blue privilege and not get ticketed if a cop were to stop him. As this case illustrates, he was right.

In spite of clearly being at fault in an accident that took an innocent baby’s life, Manuel was not charged.

Police car crashes are an unfortunately common reality. In fact, around the same time this officer smashed into the car and killed a baby, in a separate incident in California, a girl was killed after a collision with a Riverside sheriff’s car near Perris Boulevard and Nuevo Road.

As TFTP reported last year, Joan Raye, 78, is lucky to be alive after a Franklin County Sheriff’s made the dangerous decision to speed over 80 mph through a neighborhood and plowed into her vehicle. In spite of the fact that the deputy hit her, however, this poor elderly woman, like Stephens, was charged with a crime for his negligence.

Luckily, this mother will no longer have to face homicide charges and the loss of her child together.