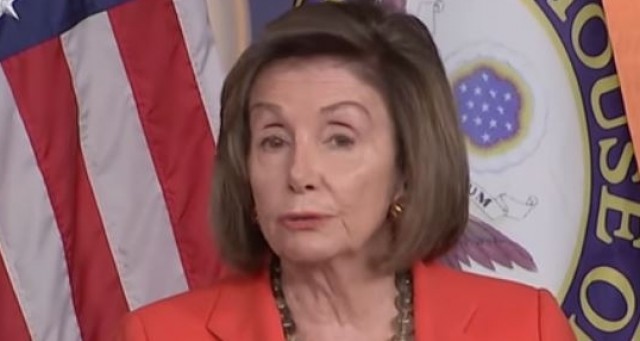 (TNS) You’ll never see anyone here compliment House Speaker Nancy Pelosi (D-Calif.) on her mental capacity because, frankly, we think she’s out of her mind most of the time.

We also won’t give her any kudos regarding her base knowledge of founding American legal principles, especially after a press conference on Thursday when she indicated that in order for President Trump to avoid impeachment, he’d have to prove his innocence.

Fox News reporter Chad Pergram asked Pelosi, “Why would the public not think that the House is dead set on a course to impeach the president…?”

“It’s called an impeachment inquiry and if the president has something that is exculpatory — Mr. President that means if you have anything that shows your innocence — then he should make that known,” Pelosi said.

Oh, har har, Nancy. She just couldn’t resist taking a pot shot at the president’s intellect, which he has repeatedly demonstrated is superior to hers and everyone else in the deep state and media who have been trying to oust him from office for three years.

But the bigger issue is this: Why does Trump have to prove he’s innocent? Because in our justice system, people charged with crimes are innocent until proven guilty.

It doesn’t matter whether Democrats like this president or not. He has the very same rights as all of them have, as every American citizen has.

Maybe Pelosi is upset because her Garbage Party can’t find anything the president did (with Ukraine, or Russia, or green men from Mars) that amounts to a “high crime or misdemeanor,” the constitutional bar for impeachment.

Maybe she’s ticked off because she put Adam Schiff in charge of the impeachment show and after the first public hearings yesterday didn’t provide any new “bombshell” revelations of wrongdoing, she’s just reaching.

Maybe Nancy Pelosi shouldn’t be the Speaker of the House next year because Republicans should be in charge of Congress again.

Maybe then Congress can get some work done on behalf of the American people who sent them there.

*Some edits may have been made.