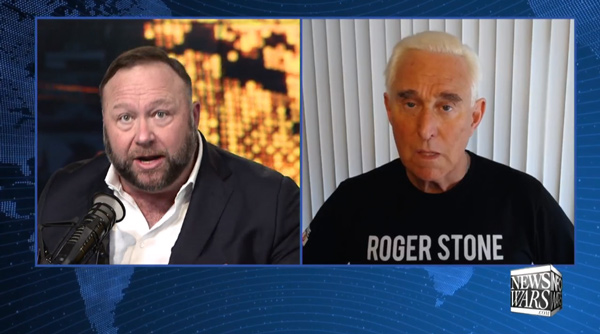 (Natural News) Exclusive – The same prosecutor who ran the rigged “kangaroo court” show trial against Roger Stone is on the courtroom floor demanding the immediate arrest and indictment of Alex Jones, according to sources who have spoken directly to Natural News in the last few minutes.

Reporters who have been covering the trial have contacted Alex Jones, warning him that the deep state is now leapfrogging off the “victory” against Roger Stone, aiming to silence Alex Jones by having him arrested. The charge? According to sources, Alex Jones is now being accused of calling for a mass uprising against tyranny. Such a call is not a crime, by the way. It is enshrined in the Bill of Rights.

When Democrats call for protests, of course, that’s characterized as “justice.” When Trump supporters call for peaceful, lawful protests, that’s smeared as a crime.

“This is the closest level of naked tyranny I have ever seen,” said Alex Jones on his live InfoWars.com broadcast today. “This is a message to the deep state that says to anybody who supports Trump in 2020, we are going to bankrupt you, we are going to put you in prison, we’re coming for your children and we’re going to destroy you,” Jones added.

In a private phone call with Alex that took place over the last few minutes, Alex told Natural News that the deep state was seeking to imprison or murder every influential Trump supporter so that no voices could speak out against the impeachment show trial being rigged / run by congenital liar Rep. Adam Schiff (loonbag-CA). The strategy of taking down Trump, he explained, has long been based on cutting off his supporters using a combination of censorship, de-monetization, “lawfare” operations and threats of arrest.

This is on top of the New York Times now running smear pieces against independent journalist John Solomon, who has been one of the most consistently accurate and credible researchers exposing deep state shenanigans.

“What went on in court today should terrify everyone in America,” Jones said during his broadcast, “…that if we don’t get control of our judiciary, we are going the way that all the nations go when they are falling. What I confirmed from multiple people in the courtroom is so criminal, is so evil… these people are absolutely unbelievable.”

It’s now clear that the CIA-run media is complicit in a massive conspiracy to criminalize President Trump’s policies, smear all Trump supporters, indict and lock up pro-Trump voices (after banning them from all tech platforms, of course) and remove Trump from office, installing a radical left-wing authoritarian tyranny that will rule over the American people like communist China.

Should they move to arrest Alex Jones, it seems likely the deep state will deliberately ignite a shooting war in America, as armed patriots would likely descend on Washington D.C. to finally drain the swamp and arrest all the treasonous criminals who have declared war on truth, justice and our constitutional republic. Although I’m not calling for such action, it is my independent analysis that a shooting war would almost certainly unfold if Alex Jones were arrested.

Reminder: There are literally half a billion firearms in the hands of private citizens across America. The Second Amendment was authored for the very purpose of allowing the people to rise up and oppose tyranny. That is its purpose.

Perhaps that is exactly what the globalists want: A civil war in America, creating the perfect cover for a UN-led invasion and occupation of the United States of America as a pretext for dismantling the nation from within.

You are witnessing the deep state attempting to push this civil war into a “hot phase” kinetic engagement. This has likely been their goal all along, to push America to the breaking point and unleash mass chaos, during which multiple efforts will be made to try to assassinate President Trump.

It increasingly looks like evil is rising while good people are asleep at the wheel. The tyranny is not being answered. The people are mass medicated, fluoridated and inundated with 5G radiation that alters brain function. Our nation is under siege.

To stay informed and join the peaceful uprising against tyranny, stay tuned to InfoWars.com, Banned.Video, Brighteon.com and NaturalNews.com.