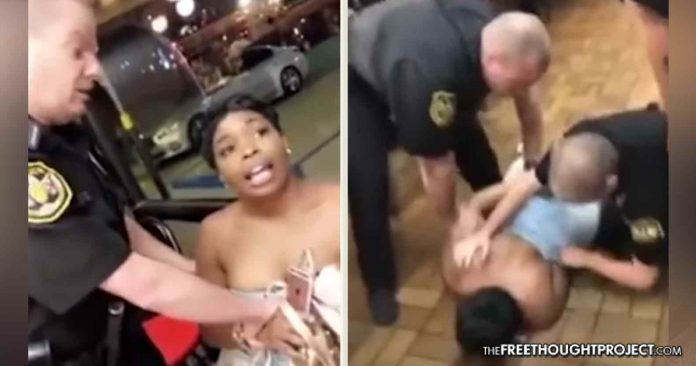 Mobile, AL — As TFTP reported last year, residents were outraged and the NAACP has stepped up after a graphic video from inside an Alabama Waffle House went viral showing a violent police struggle with a young woman. During the violent encounter, the woman’s breasts were exposed. Now, the alleged victim in this case is seeking compensation for this treatment. Unlike most lawsuits for police brutality, however, the taxpayers will not be held liable this time. Instead, she is suing Waffle House.

On Wednesday, lawyers for Chikesia Clemons announced a lawsuit against Waffle House for its involvement in Clemons’ arrest. According to WKRG, Clemons is suing Waffle House for unlawful discrimination, intentional infliction of emotional distress, malicious prosecution, and abuse of process.

Highlighting how unnecessary the escalation of violence was, the entire incident was sparked over plastic utensils. According to witnesses involved in the incident, 25-year-old Clemons was inside Waffle House with a friend and had placed an order when they were told they would have to pay $0.50 extra for the plastic utensils.

After being told she would have to pay for the utensils—something that is largely available for free at most restaurants—Clemons and her friend Canita Adams questioned the charge, noting that they did not have to pay for them the night before.

According to Chiquitta Clemons-Howard, Clemons’ mother, after they asked why they were being charged for the plastic utensils, the Waffle House employee canceled their order.

At that point, according to Clemons-Howard, her daughter asked for the contact information of the Waffle House district manager who is in charge of that location.

“They didn’t even ask her to leave, she was waiting for them to give her the district manager’s card so she could file a complaint on one of the waitresses,” Clemons-Howard said. “When they went to go get the card, that’s when the police showed up. The officer should’ve come in and said we need you to leave.”

What happened after that was a miscarriage of justice, Clemons-Howard explained to AL.com.

“The footage shows the story completely,” she said. “My nerves are very, very bad right now.”

As the video shows, Clemons quickly found herself surrounded by police. The video starts out with one officer physically grabbing Clemons as the young woman tries to explain what is going on.

The video then jumps to officers throwing Clemons down. As two officers pile onto the young woman, her top comes off and her breasts are exposed, prompting Clemons to try and cover herself up.

“What are you doing?” Clemons asks at one point, to which an officer responds, “I’ll break your arm, that’s what I’m about to do.”

For those who don’t recall, this incident happened around the same time as a similar incident — also in a Waffle House — in which a 16-year-old boy was beaten by police. Last year, as TFTP reported, Anthony Wall took his 16-year-old little sister to prom and was enjoying a late night dinner at a Waffle House afterward when he was attacked by a massive cop for no reason. Instead of the officer who attacked him being held accountable, Wall had to go to trial.

In May, the case gained national attention after video of the incident went viral showing officer Frank Moss treat Wall like an animal, slamming him back and forth, and choking him.