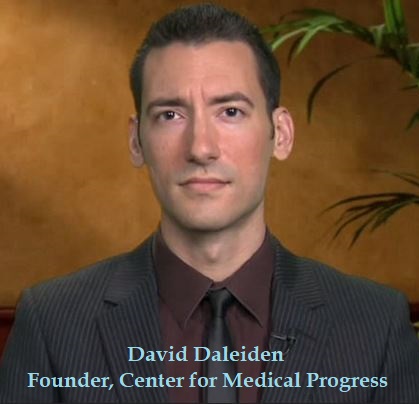 Dr Eowyn’s post first appeared at Fellowship of the Minds

Friday, a jury in San Francisco U.S. District Court, found in favor of Planned Parenthood (PP) in its civil lawsuit against David Daleiden, the courageous founder of Center for Medical Progress (CMP) who took the undercover videos showing PP’s participation in the ghoulish harvesting and trafficking of baby body parts.

The jury awarded Planned Parenthood $1.35 million in damages on the RICO (racketeering) charges, $870,000 in punitive damages and presumably millions of dollars in attorneys’ fees on top of that.

Thomas More Society, a not-for-profit, national public interest law firm
dedicated to restoring respect in law for life, family, and religious liberty, is leading Daleiden’s defense. In an email, Tom Brejcha, President and Chief Counsel of the Thomas More Society, calls the verdict “the worst case scenario” — “the predictable result of an unfair trial presided over by a biased judge”.

Defending Daleiden is not the only abortion battle that Thomas More Society is fighting. Brejcha writes that “earlier today the Ninth Circuit Court of Appeals issued an opinion ruling against us in the related case brought by the National Abortion Federation” and that “Thomas More Society attorneys will be back in State Court Judge Christopher Hite’s courtroom in less than a month for his decision in the criminal case” against Daleiden and the CMP.

Brejcha vows that Thomas More Society will continue standing alongside Daleiden in this multi-front war that will take years to win, “until we defeat every lawsuit and clear David or every charge.”

Thomas More Society is asking for our help. To donate, go here.

I never ask you to donate unless I myself have donated. I have donated to the Thomas More Society, and I will donate more.

According to Charity Navigator, administrative expenses account for only 7.4% of Thomas More Society’s total expenses. In 2017, its total expenses ($4,839,610) exceeded its total revenue ($4,702,038) by $137,572. As president,  Brejcha’s total compensation (salary, cash bonuses and expense accounts) was $175,366, which is a reasonable salary compared to the salaries of the CEOs of other non-profits.

In 2016, Charity Navigator undertook a CEO Compensation Study of 4,587 U.S. charities, using their IRS Forms 990 for fiscal year 2014. The study found that the median CEO compensation was $123,362 and that “CEO salaries at nonprofits reflect the regional variation in the cost of living. For example, CEOs at charities in the Northeast and Mid-Atlantic, which include cities like Boston, Washington D.C. and New York, tend to earn higher salaries, than those in other parts of the country.” Thomas More Society is in Chicago, Illinois.

In 2013, Charity Navigator’s CEO Compensation Study found that 78 CEOs CEOs earned salaries between $500,000 and $1 million. Among them were:

In 2017, the CEO and president of the National Abortion Federation (NAF), Vicki Saporta, was paid a salary of $392,018. NAF’s new president is a lesbian Episcopal priest.