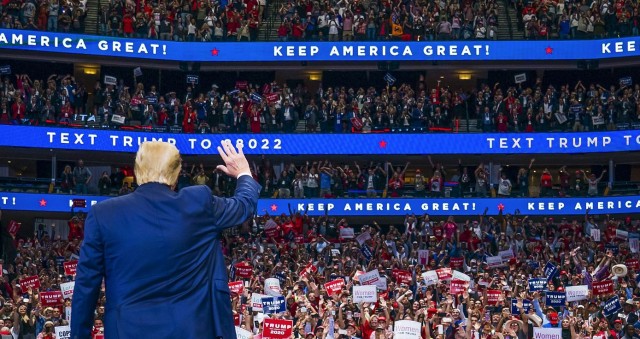 (TNS) Long-time readers know that we don’t place much stock in polling because it is habitually skewed and used by mainstream outlets to drive and shape narratives, not to actually inform the public.

But a recent survey regarding the American public’s appetite for impeaching and removing President Donald Trump from office caught our attention because, given other data and the fact that he is still drawing massive crowds at rallies, we think it has some merit.

It just ‘rings true,’ if that makes sense.

A series of Saturday tweets from Daniel Vaughan, an attorney, conservative columnist and podcast host, highlights new polling data showing that support for impeachment and removal is tanking.

In short, the Garbage Party is losing the PR battle; the fake impeachment ‘inquiry,’ the phony witnesses, the changing stories, and the fact that Republican lawmakers are punching holes in everything Democrats are claiming about Trump and Ukraine aren’t working.

According to Nate Silver’s 538, support for “impeach and remove” is at its lowest point since early October.

“Support for “impeach and remove” is at 46.7% support. The lowest since the story snowballed in early October. Opposition to the impeachment inquiry process is at 44.7%. The highest since early October.”

Trump’s approval reminds around 41-42% in the @FiveThirtyEight avgs. Around 44% on the @RealClearNews avgs.

The generic ballot is about the same in both too.

If you’re a pundit and you lead with or argue this past week harms Republicans or Trump, you’re picking a narrative, not reality.

Impeachment is a political process and Democrats are losing any mandate they might have had on impeachment.

59% of people in a Monmouth polls said election should be used to oust Trump, not impeachment. Only 34% said impeach now — and of that 34%, most of them could get backed down to admitting an election was better https://t.co/N3UaOFN9Bg

And remember, Trump’s approval rating among Republicans is stunningly high — 85-90 percent, depending on the poll.

We live in a different time now, but partisanship was pretty high back when Bill Clinton was going through impeachment. And on the back end, after the Senate failed to convict, Clinton’s polling numbers were actually higher, on average, than when the process began.

And Trump has a lot of positives going for him: The economy is soaring, he’s made some progress on controlling the border, the military is stronger, the tax cut helped most everyone, and he’s making headway in getting prescription drug prices lowered and healthcare costs made more transparent.

Polling data from mainstream media types must be carefully scrutinized for bias because it’s usually there. So when a traditionally Left-leaning polling outfit produces good numbers for the president, it’s worth a second look.

Plus, Vaughan is exactly right: The Garbage Party and their media sycophants can’t stand the president and want him out, but they live inside a bubble that serves as an echo chamber for preconceived outcomes and thought.