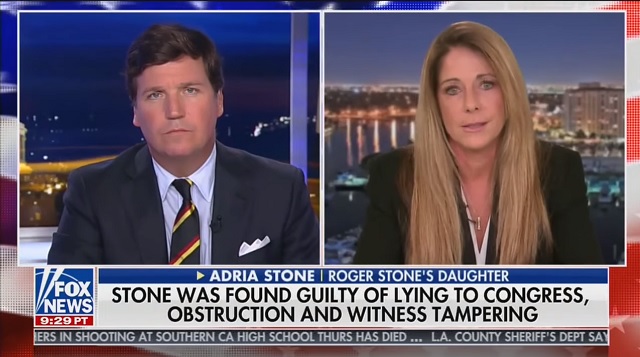 Tucker Carlson said Friday that Roger Stone was imprisoned for “supporting the wrong candidate” and interviewed Stone’s distraught daughter who pleaded for President Trump to give him a pardon.

The daughter of Roger Stone delivered an urgent plea to President Trump to “save” her family after her father was found guilty on all counts for impeding a House investigation into Russia’s interference in the 2016 election.

Adria Stone appeared on Fox News on Friday, hours after her 67-year-old father was convicted by a federal jury on seven counts that include lying to Congress and witness tampering.

Host Tucker Carlson said he believes people will be “watching really carefully” for Trump to bestow a pardon on his longtime informal adviser. Adria Stone, 53, responded by making a request directed at the president.

“Donald Trump — if you can hear me, please save our family. He does not deserve this. Nobody deserves this,” she said.

Carlson laid out how corrupt Judge Amy Berman Jackson railroaded Stone to ensure he was convicted.