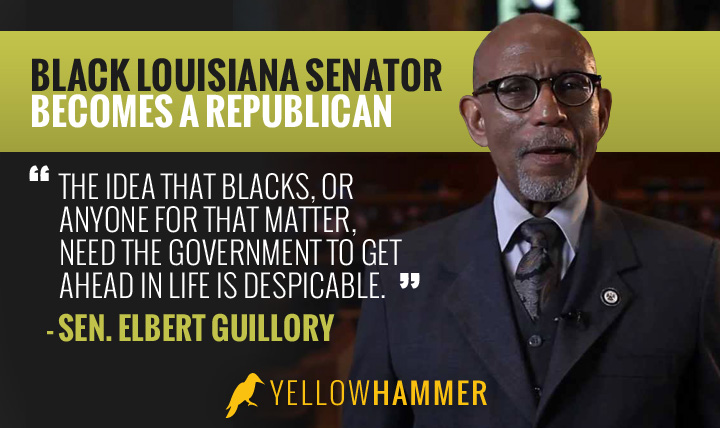 In 2013 Elbert Guillory, then a black state senator in Louisiana, switched from Democrat to Republican.

A speech explaining the switch is making the rounds on Twitter again and every American, especially minorities, needs to watch it.

Louisiana voters, please watch why @elbertguillory left the Democrat party when he was a State Senator.

Here is a partial transcript from a prior speech in 2013, via Alipac:

With each passing day, I have become disappointed in the Democratic Party. What would be the impact on schools due to immigration?

One of the biggest disappointments has been breakdown of American families. Their policies have encouraged the high teen birthrate, high school drop out rates, high unemployment. Children are encouraged to get the crazy check instead of honkering down to get an education.

Minority unemployment is in the stratosphere.

Guillory coined the word “Scaredy Pants Crisis Management.” I want better for my country and Louisiana. We must help America find her path home. The people in this room today seek an alternative solution to these problems of America. We have received some pretty good deals under the Republican Party. Republicans helped LBJ pass the Civil Rights Act over the OBJECTIONS of most Democrats. President Nixon left Vietnam and brought the money home and invested in America; Obama hasn’t done anything like that.

I pledged my dues, and I look forward to creating new partnerships in the State of Louisiana. I am of this day joining Frederick Douglass as a Republican.

Is there any truth to the words of Elbert Guillory?

That depends who you ask.

But let’s set some facts straight that many Democrat voters may not be aware of.

As we head toward 2020, more and more black voters are awakening to the truth about the Democrat party while some have known for years.

Democrats survive on impoverished voters who rely on handouts.

If those voters stop being impoverished, they generally stop voting Democrat.

Republicans are the party of empowerment who aim to teach men to fish rather than giving them fish.

The welfare gravy train can only go on for so long before it collapses, and Black Americans are finally waking up to the fact that Democrats have been selling them short for years.

They have been voting for their own destruction.

Look at what has happened in liberal havens in California.

Sometimes, as in the case of Elbert Guillory, someone switches sides for all the right reasons.