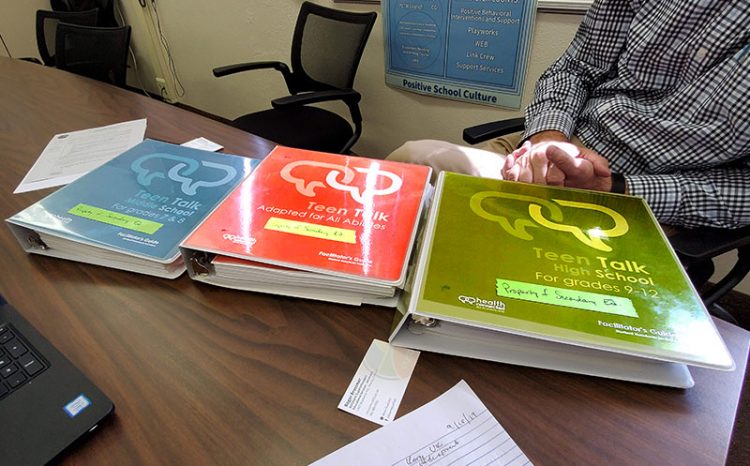 I suppose better late than never, but parents are going to have to man up and not only express outrage, but understand the enemy, which is the corrupt state at this point, will simply take a step backwards at their outrage only to continue to assault their children that they willingly sacrifice to the beast system of indoctrination.  In Downey, California, a suburb of Los Angeles, parents became outraged when the bizarre, radical indoctrination of a professed “sex-ed” program was exposed by activists at Mass Resistance.

Most parents of schoolchildren have no idea how much graphic, radical LGBT, and sexuality propaganda is in their public schools. And it’s very difficult to find out. This has become a problem all over the country. More and more of it is based not on science but on bizarre LGBT and “gender” ideology – which can lead to very harmful consequences.

In Downey, CA, a largely minority, working-class suburb of Los Angeles, the School Board recently overwhelmingly passed a “comprehensive sex-ed” curriculum for the middle school and high school grades. Parents were upset with the phony “public vetting” process that revealed little about it – and the school refused to make the details of the curriculum public. So they asked MassResistance to help them.

MassResistance organizer Arthur Schaper went to the district office and demanded to see and photograph pages from curriculum documents, and from a few slide shows. After initially denying him, they finally relented.

So, what did Mass Resistance discover?

Here are some of the odious things included in the Teen Talk curriculum (CAUTION: graphic material included):

From what we know, this curriculum is probably very similar to most others around the country. This is what your school officials want to push on your children.

These curricula are carefully designed to separate students from their moral foundations. But also, they are full of unscientific nonsense that they present as fact.

MassResistance also pointed out how the county got to this point in just a few, short years and how MassResistance and outraged parents have begun to respond in a largely conservative, Hispanic community.

In 2015, the California Legislature passed the “California Healthy Youth Act” (CHYA), which mandates that schools teach so-called “comprehensive sexual health education” which includes LGBT issues. This is part of a national push in legislatures across the country by Planned Parenthood and the sex-ed lobby.

However, the text of CHYA allows for a fairly broad implementation – and requires that anything taught be “medically accurate” and “age appropriate.” (But the sex-ed lobby ignores or re-defines those qualifiers.) It allows for opt-out by parents, but in practice school officials often make that cumbersome and difficult. Also, the very presence of radical, graphic programs poisons the entire school environment.

In November 2016, the local ACLU threatened to sue the Downey School District if it didn’t comply with CHYA, since it had not made any effort to do so.

Instead of developing a curriculum of their own or find one which would reflect the conservative values of the community, the Downey School Board simply asked the Dept. of Education bureaucrats to select two programs for them to choose between. Not surprisingly, the bureaucrats selected two programs that are very offensive and explicitly LGBT.

In December 2018, a committee of teachers and school staffers selected by the Superintendent chose one of the programs, “Teen Talk,” which is a commercial curriculum that was created in part by Planned Parenthood and is distributed by an organization called “Health Connected.”

During 2019 the Downey Unified School Board had various presentations of the Teen Talk curriculum at their meetings, publicized it in the local newspaper, and held three “Parent Information Night” meetings to discuss it. However, according to parents we spoke to, the presentations were not well advertised, were not well attended by parents, and did not include any of the voluminous graphic or offensive material. It was just about all generalizations and flowery “feel good” talk about helping kids with social issues.

One of the parents reported to us that the district would not even provide the School Board members’ email addresses so parents could contact them directly about this.

In April 2019 the school officials announced that individual parents could see the actual Teen Talk curriculum by reading through the program binders, which were located in the in the Downey School District office. But they had to make an appointment first and go there during business hours – which very few parents could do. And they were not allowed to photograph or copy any part of it.

In early August 2019, one of the parents contacted MassResistance about Teen Talk, and it certainly raised alarms with our Southern California activists. Teen Talk – a horrible program that is closely identified with Planned Parenthood – had been used in the Anaheim Union School District. But in June 2019, MassResistance parents successfully pressured the Anaheim School Board to remove that curriculum from the entire district! This was done based on what parents had heard from their children in school!

On August 29, 2019, the last of the three “Parent Information Nights” for Teen Talk in Downey was held. This time a group of Downey MassResistance parents attended! But the school officials were quite hostile. They presented their “soft” Teen Talk presentation and refused to answer any hard questions by the parents. The presenter also told the parents that photos or recordings of the meeting were not allowed – but were forced to back down after only being informed that California’s open meeting law allows it. (School staffers often try to take advantage of parents’ lack of knowledge of their legal rights.) It was very upsetting.

On September 9, outraged parents came to the Downey School Board meeting and demanded that they use a different curriculum than Teen Talk. They were particularly upset that they hadn’t had a chance to actually see the curriculum, only sanitized version that the school officials had presented. Nevertheless, at that meeting the School Board ignored the parents and voted 6-1 to implement it.

On September 19, Arthur Schaper of MassResistance scheduled a meeting at the Downey School District main office to look at the Teen Talk curriculum. Arthur was told that because of “copyright issues” he could only look at the curriculum binders, but not photograph any part of it. But Arthur insisted that since it will be used in public schools, the entire public had a right to see it. After some discussion, they decided not to prohibit Arthur from taking photos of it. (NOTE: Many parents would have just given up and not insisted!) The following day Arthur posted many of the photos in a report.

Since parents have mobilized and begun to confront these criminals, things have started to happen and the parents aren’t taking no for an answer.

MassResistance has been fighting a good fight in our country against the sexually deviant and those who want to target children with this kind of indoctrination, including the pedophiles and queers that target children in the infamous Drag Queen Story Times.

They are an organization worthy of your prayers and support!